Drain for water softener on patio

Hello everyone. i'm looking for some help / advice with a project i'm working on. My house is in southern California and was built in the 1950s with cast iron drain pipes.

I'll be installing a water softener and back flushing carbon filter on the patio in the near future. I am trying to determine best practice for getting the flush water from both the softener and filter into a drain. I'd rather not run it out into the garden. there is a cleanout located right next to where the softener / filter setup will go.


OD of the threads is 1 3/4. in a cursory search of the big box stores, this doesn't seem like a common cleanout cap size anymore. Is there a way to modify / adapt to get the appropriate arrangement (trap, standpipe, air gap fitting, access to cleanout etc) to use this as a drain for the water softener / filter? Is there another approach I should be taking here instead?

If I'm missing any important information, I'll be happy to go find that and update this post.

Here is a picture of the existing cleanout on the patio 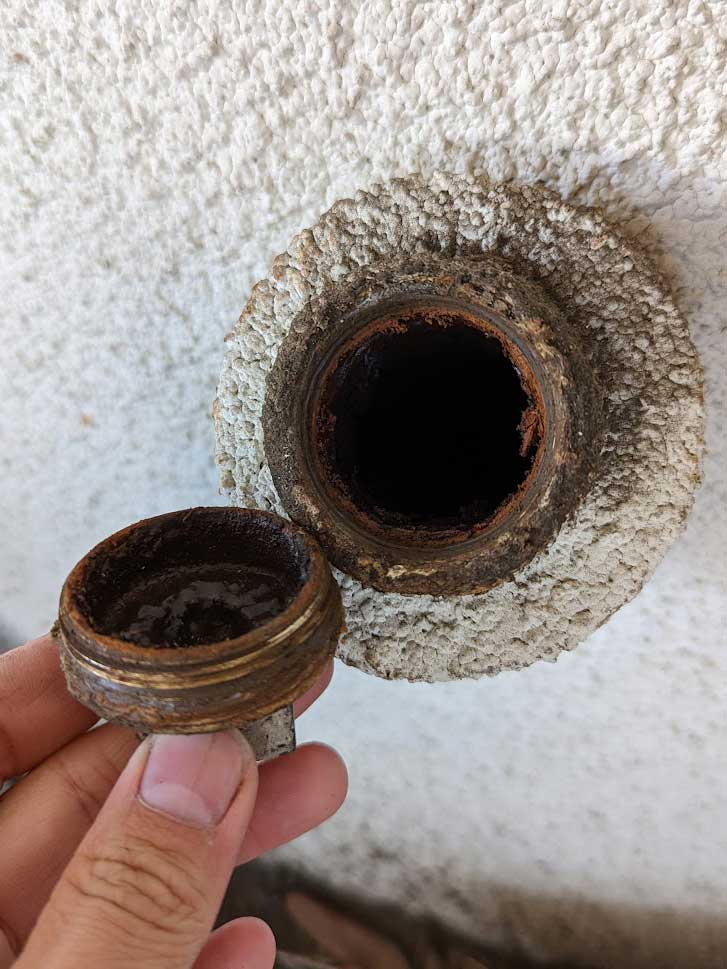 that's a good point about the filter drainage versus the softener. hadn't thought about that.

i popped that cap out and cleaned it up a bit on the wire wheel. looks like the major thread diameter is right around 1.9. thanks for the clarification on the thread sizes. 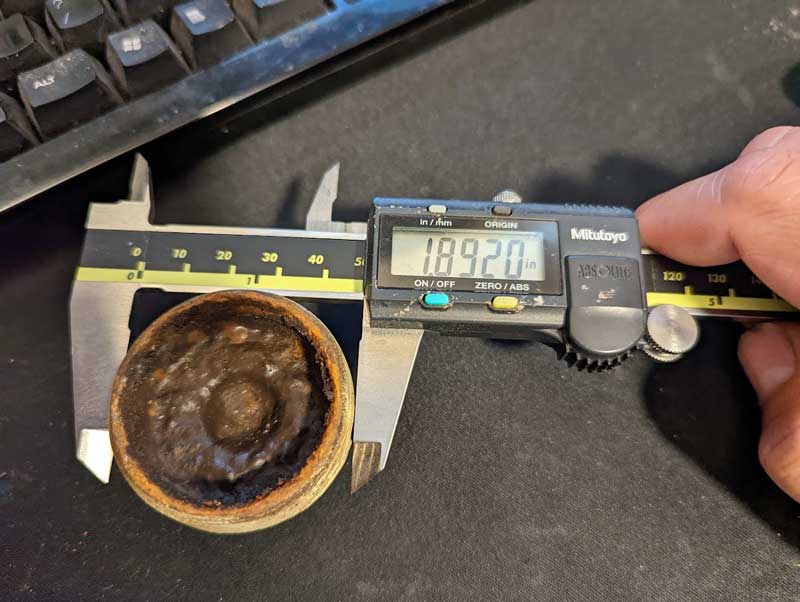 ok..did some more looking around and i have some additional details.

The cleanout pictured above is directly behind the kitchen sink. There is a vent for the kitchen sink up on the roof. I drew this diagram (not to scale due to my bad art skills). Would this be a functional setup if properly supported and stabilized? Would the vent in place for the kitchen sink be sufficient for this added contraption on top of the exterior cleanout? I have been searching around this afternoon and my plumbing experience is limited. I haven't found a whole lot about this specific arrangement in my searching thus far. If I'm barking up the wrong tree here please let me know. 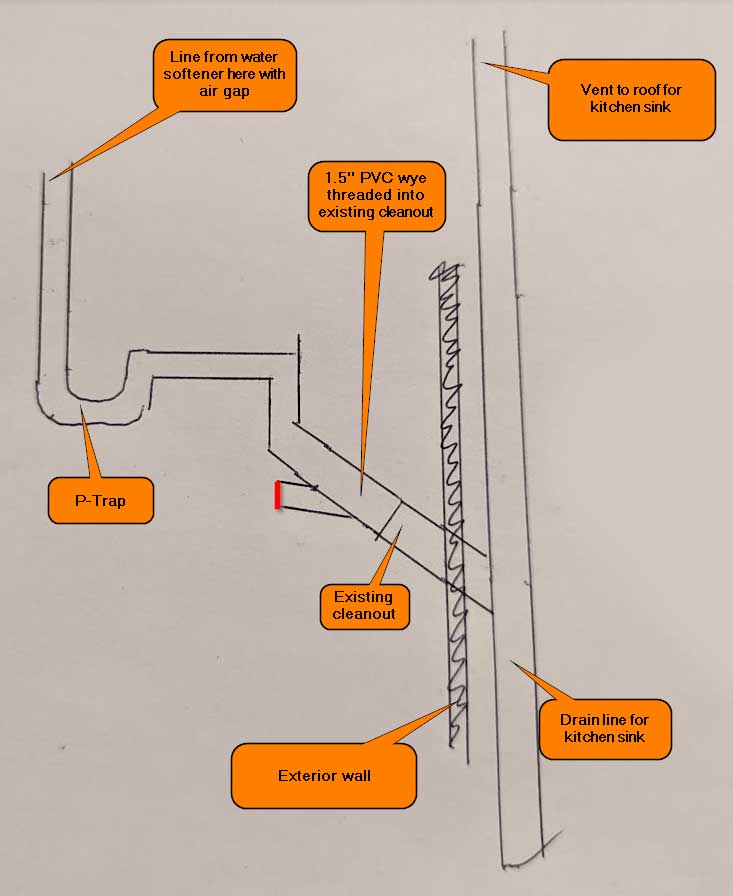 After P-trap, line should stay horizontal (1/4 inch per ft slope) until the vent. What you drew does not seem to meet that need.

You can usually just tee a backwashing filter drain with a softener drain, and then feed the combination into your standpipe. The connection should be via an air gap. Just make sure they regenerate at different times. GPM for filter backwash is much higher than for the softener. So make the path for the filter straight, and bring the softener drain into the side port of the tee.

Appreciate your input on this Reach4.

if I'm understanding your post correctly, the circled section of the existing cleanout means that an installation of any type of p-trap attached to it would not be installed correctly as it would not be purely a horizontal connection to the vent line. 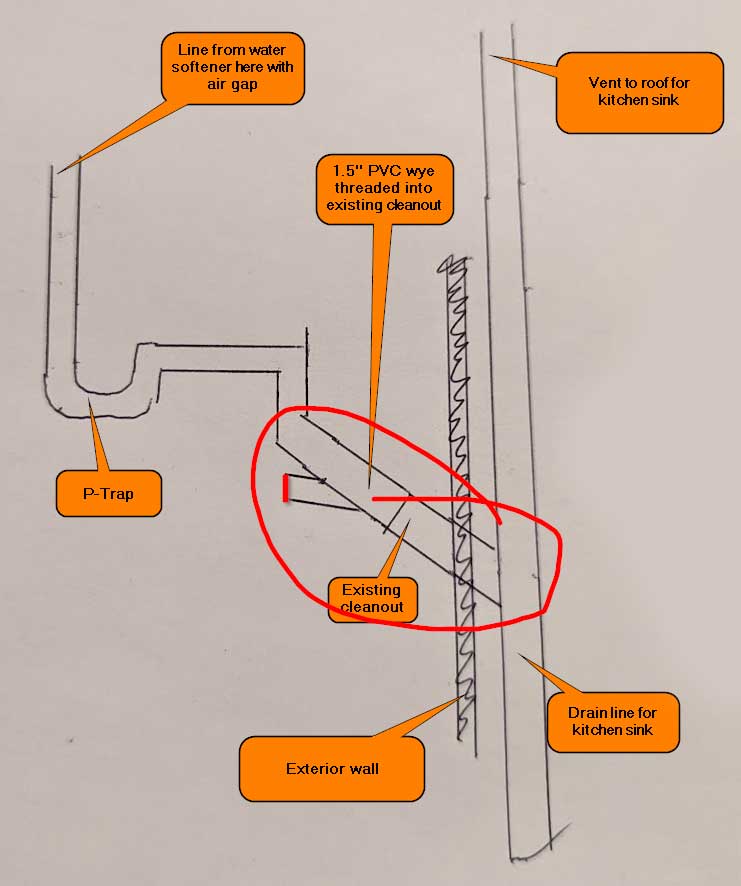 If that understanding is correct, would I need to do an installation something like this in order to have it correct. 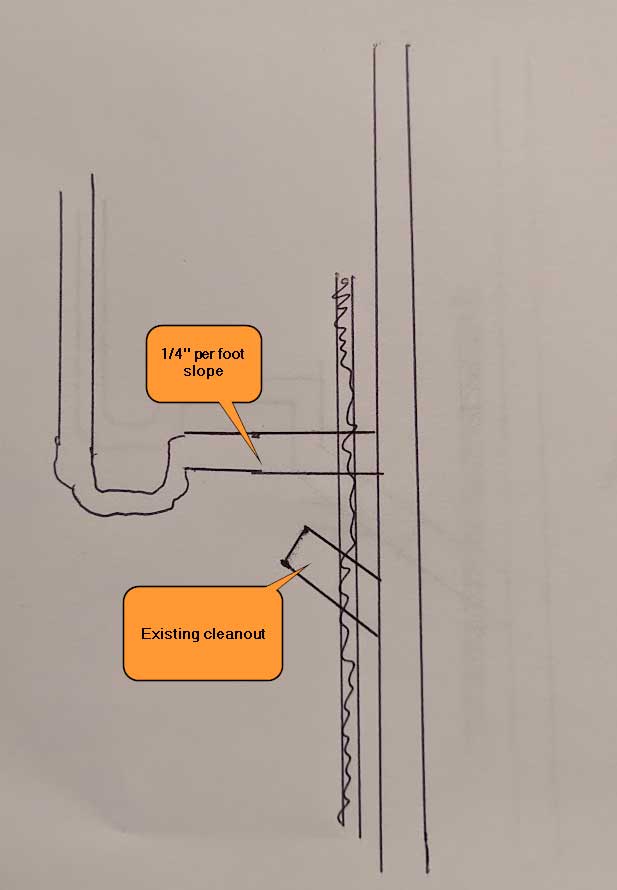 What you propose may work. "Work" is a lower standard than work and meet code.

The problem with an unvented trap is that the water may siphon out of the trap U. A vent breaks the vacuum that makes a siphon happen. In many areas, an AAV (air admittance valve) can supply the vent. I don't think that is the case with code in your area. If a P-trap siphons out, that allows sewer smells into the house. The water standing in the U forms a "water seal" against the gases.

Reach4 said:
What you propose may work. "Work" is a lower standard than work and meet code.

The problem with an unvented trap is that the water may siphon out of the trap U. A vent breaks the vacuum that makes a siphon happen. In many areas, an AAV (air admittance valve) can supply the vent. I don't think that is the case with code in your area. If a P-trap siphons out, that allows sewer smells into the house. The water standing in the U forms a "water seal" against the gases.
Click to expand...

Point taken about the difference between working or working and meeting code. Looks like i'll be looking for other options to get this drain situated.

As the story continues...

a plumber came out today to check some unrelated parts of the house. their recommendation for the water softener was to just drain it directly into the cleanout...maybe time to look for a new plumber...

Went under the house and did some digging around in the crawl space under the house. Pictured here is the drain pipe that the laundry sink is plumbed into. it has a vent that goes up to the roof .OD is 2.25 inches (common size of 2 inch?) 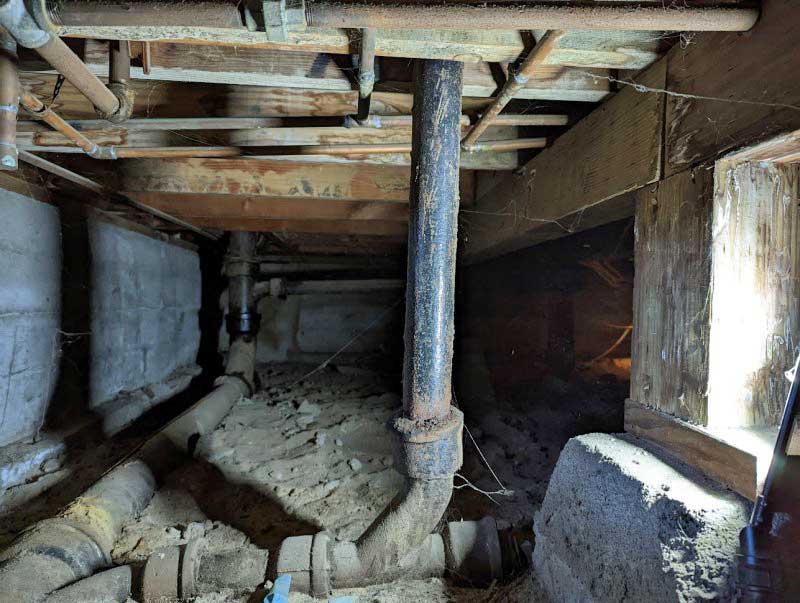 After doing some more googling and searching here and on other forums, I have a few more questions. 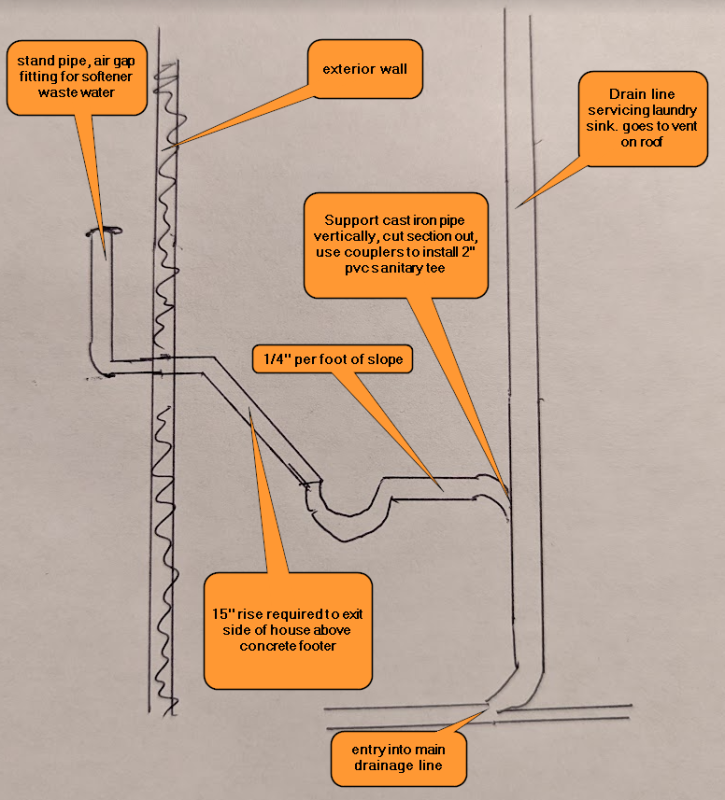 1) From what i could tell, there is possibly (probably) a code issue with having a p-trap that is not attached to a shower or bathtub in the crawl space.

2) I'm not 100% clear on having a run leading to the inlet of the p-trap. Ideally it would be a straight vertical shot, but i don't think it would be good to have the drain fully under the house out of sight and be the lowest drain in the system. This diagram would end up with an offset riser from the trap in order to exit through an existing crawl space vent. I have seen other discussions for showers where there is a concern of having soap scum build up in the inlet run to the p-trap, but i don't think that would be a concern here.


Any input is appreciated. Thank you
You must log in or register to reply here.