Toto over the years has used a few different fill valves, but those sold in the USA, along with those on some other brands, tend to have valves made by Korky, so the following applies to those as a group.

Plumbing bits don’t last forever, and especially if you have high water pressure, the cap seal on your Toto/Korky Quietfill flush valve doesn’t either. When they are getting to the point where it needs to be replaced, you’ll notice one or more of the following symnptioms:
- a delay from the flush to when the refill starts
- excess water spraying out of the cap (if you don’t put the cover back on, it may spray, hit the top of the tank cover, and leak out)
- and, eventually, it won’t shut off (this could also be a symptom of the flapper valve being worn out)

Replacing one is easy, does not take any tools, and is cheap. Www.supply house.com has them at less than $2, but then you have to add shipping. If you’re going to order more than a couple, it’s way cheaper than Amazon, and many of your local retail plumbing supply houses, and they ship fast. I don’t have any financial interest in this company. I just ordered a few, one to replace one that had failed, and a couple more as ready replacements for the next time, which, on my water, use factor, and water pressure, seems to be somewhere between 2-4 years. Some may get much longer, and if your water pressure is excessively high, maybe shorter.

As the seal ages, it starts to conform to the cage it gets pushed against, and hardens. How fast depends on your water chemistry so a well owner might get much longer use out of one. On municipal water supplies that have potentially lots of chemicals in it to keep pathogens down, or with higher supply pressures, your viable lifespan will be less.

I just replaced mine, and took a picture of a new cap next to the old one. It was still sealing, but you can see the cracks, and it probably wouldn’t have lasted much longer before it wouldn’t shut off at all. I didn’t notice it delaying the refill on this one, but have noticed it previously on this toilet as the cap’s seal aged out.

Be careful to ensure that the fill tower height is in the locked position, and stays there as you try to remove the cap, otherwise, you’ll spend some time readjusting it so that it shuts off at the proper level.

It can take some force to remove and replace the cap as it’s a plastic to plastic turn-lock cam arrangement, but it helps to use the stub where you attach the hose for a bit more leverage and most people should be able to do this themselves rather than paying a plumber to do it for them. Often, people think they need to replace the whole valve, and that’s true with some designs, but not if you have one made by Korky (from the factory, it says Toto on those installed by Toto, but it’s the same thing using the same parts). 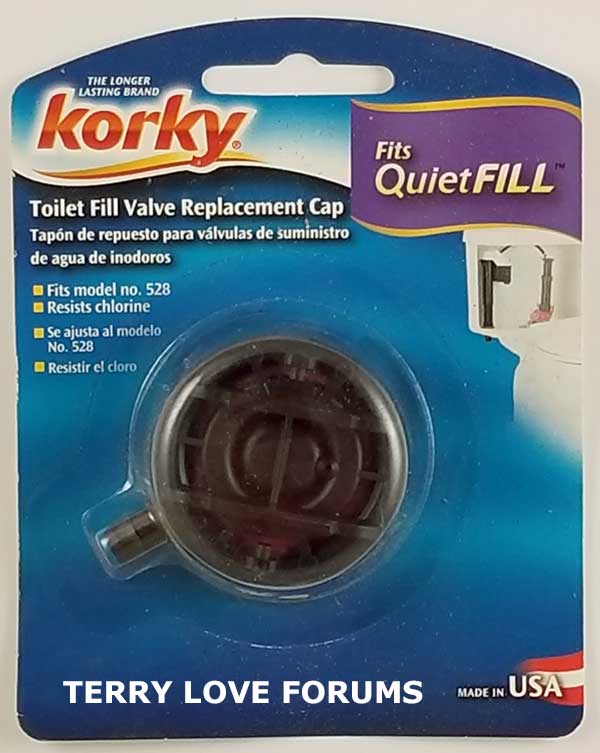 I find that I have had so many further failures on that tiny black gasket under the float cup assembly, that it is not worth just changing the cap unless the job is very close to my home base.
Also, there should be a little white plastic "arrow" to lock the shank adjustment into place. Don't even bother to replace the cap unless the plastic lock piece is available.

The fill valve on one of my toilets is the original from Toto, installed 20-years ago. I just keep replacing the cap when it gives me problems, and have not had any other fill valve failures that would lead me to changing the whole thing out. I’m not sure they used that locking pin 20=years ago, but there is none on mine. It’s easy to hold the body from turning that unlocks it while turning the cap off, and probably isn’t a bad idea even if the pin is in place.
You must log in or register to reply here.