Every rainy season, we have rainwater drainage off a large adjacent sloping parking lot that seeps/collects in the crawl space underneath our house. Along a 20 foot length of walkway that runs between the edge of the parking lot and the house foundation (where the water enters) is 4-inch buried non perforated corrugated pipe that comes off one of the house/garage downspouts and drains out off the back side of our property. We know the bulk of the water is seeping under the walkway along this 20 foot section. Can we “splice” in a 20-foot length of perforated/corrugated pipe (i.e. French drain, with associated gravel/mesh fabric, etc.) to collect and divert this runoff without interrupting the existing downspout drainage?

The topography and how your foundation relates make a big difference. The more you keep water from collecting against the foundation the better. If you have a downspout drain and can tie into it with a well designed system I would imagine it would help.

Adding to an existing drainage system to take care of your down spouts, it might over whelm the 4" pipe during good down pours. It sound that it would be best to add drain basins and additional pipe.

My son's home has a similar problem. On the other side of the fence the ground slopes toward his home. The home next door has not been occupied for years and the ground erodes with silt and water coming from under the fence. To aggravate it the bask yard slopes the wrong way but a drainage system was added by a previous homeowner and it helps.

The home is on a slab but the water floods his pool deck and the run off silk builds up against the house. If you notice the dirt line on the house wall, it is above the inside 1st floor level. Previous owners tried to take car of the problem but it was never done correctly. The home was built in 1977. The two drain basins were there and they drain to a 4" pipe that runs to the street but notice that they were about a foot below grade. My son and I dug out the dirt to level the ground, installed a retaining wall with plastic sheeting behind it. We extend out 16 feet and have another 16 feet to go to get it almost right. Next summer we'll extend it further. Fortunately it is all sandy soil so the digging is easy.

As proof of our work, for Hurricane Ian that went through Central Florida last month, a good rain maker of about 6" in 12 hours, the water never backed up to the pool deck and the next day this area was fairly dry. 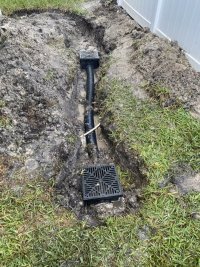 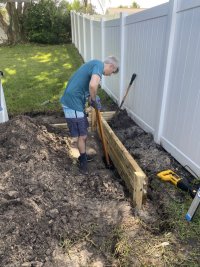 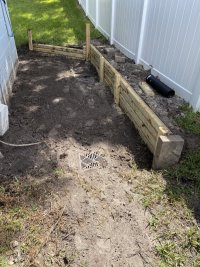 Flushed out the well pipe yesterday. Ready to finally install the pump.