Why you should have an expansion tank in your home

Basic facts...
- water expands when it is heated; pipes don't (much).
- Plumbing in your home is designed for a maximum of 80psi continuous...more is not good for things like washing machine hoses, or actually any hoses to things like faucets, ice makers, toilets, or the seals for your faucets, etc.
- The safety valve on your water heater is called a Temperature and Pressure relief valve (T&P valve). It should actually never open unless there's a fault (you should check it periodically to ensure it is not frozen, though). It is designed to open if the pressure exceeds 150psi, or the temperature exceeds 210-degrees...neither of which you really want to exist in your home. Failure to open when necessary can cause the tank to literally explode and launch itself through the roof...steam is really powerful.
- Since the pipes don't expand (much), expansion causes the pressure to rise VERY quickly until something leaks or breaks.
- For scores of years, when a water heater ran and the water expanded, it would simply push back into the water mains, not causing you a problem
- If for some reason, your water became polluted, not a common thing, but possible, when the water expanded, it could push contaminants out into the pipes feeding all of your neighbors. Think a hose left in a puddle with dog poop, insecticides from your lawn, or fertilizer and a hiccup occured (firefighters opening a hydrant and the pressure drops, sucking in crap from the hose, for example). As a result, water utilities have been retrofitting check valves to prevent that from happening. If it hasn't happened yet, sometime in the future, it likely WILL happen.
- All 'closed' plumbing systems need some place for that expanding water to go and not create problems.
- A pressure reduction valve you may install creates a 'closed' system. One SHOULD be installed if your pressure from the utility exceeds 80psi any time during the day or night (it usually is higher in the late night when they refill the water towers and few people are using water, so you might not notice it during the day).
- Some people install a pressure relief valve to prevent the water from getting above a certain level...those are not really designed for that purpose - again, they're a safety device, not something designed to open every time the water heater runs. Nor is it a good idea to just be dumping water for no good reason.
- Some PRVs have a relief valve in them. That valve won't open until your home's pressure exceeds the incoming pressure, negating the whole purpose of installing a PRV in the first place. Plus, if the utility has installed a check valve, it's irrelevant if that valve opens, there's no place for that expanding water to go unless you have a working ET. So, IMHO, it's not buying you anything to have a PRV with a relief valve in it, it costs more, and adds complexity, and, in many places, just won't work if there's a check valve.

So, that brings us to why an expansion tank (ET) is required in many plumbing codes, and a good idea to have in any facility except where you may have your own well when the bladder, storage tank can provide room for expanding water.

To work properly, the ET should be installed between the WH cold inlet and any shutoff valve so that it always can do its job. From a practical viewpoint, it can go anywhere on the cold supply, but should someone isolate it with a valve, the tank becomes useless...it's far better to preclude that situation ever happening, even temporarily. The ET generally is not recommended to be installed on the hot side, but would function in the same manner. Some are designed for use in both hot and cold, but many are only designed for use on the cold side. They tend to look identical to ones used in hydronic heating systems, but can have different bladders inside...IOW, they'll degrade faster when on the hot side, so install it where it is designed!

To properly install an ET, you need to know your static water pressure. The ET has an air valve on the bottom called a Schrader valve...the same thing that's used on your car, bike, motorcycle tires to inflate them. You must adjust the precharge on the tank prior to installing it, and it should be the same as your typical peak pressure. This puts the bladder at its neutral point, and maximizes its acceptance value (the amount of water it can accept) with the minimum deflection. This helps to maximize the life since it won't have to flex as far each time.

The ET won't last forever. A common symptom people will notice is that the T&P valve on their WH will be opening. This is almost certainly a symptom of a faulty or failed ET. One of two things, either the tank has leaked air out the valve or a hole, or, the bladder has failed. If you open the air valve on the bottom of the tank, and it leaks water, buy a new tank! If it releases some air, it may just have slowly leaked out. This can happen if the valve is not seated properly, but also if you failed to tighten the cap which acts like a secondary air seal.

To repressurize an ET, you first must shut off the water, then open up a valve to relieve any pressure. Leave that valve open, then you can add air to the tank. Once you've done that, let things sit for a few minutes, then recheck the pressure. If it's stable, close that valve you left opened, and turn the water back on. If you can't get the pressure up on the ET, or you can hear leaks, it's time to replace that tank.

The ET needs to be properly sized. A bigger WH will potentially have more volume of water to heat and thus need more space for it to go...that may require a larger ET. Having one too small means that the rubber bladder inside will get stretched further than it was designed to, and fail sooner. It doesn't hurt to have one larger than needed other than the (slight) increase in cost. The manufacturers of these tanks generally have a calculator to help you size the ET for your home. This needs a few inputs from you in order to calculate things properly:
- size of the water heater tank
- coldest incoming water (usually, your wintertime incoming water temps - mine has literally been measured at 33F after a cold spell, live in S Florida, it might be near 70F, or so)
- how hot you run your WH.

Once you've entered those items, it will calculate the amount of expansion, and then recommend an ET that can handle the required volume.

When installing one in your system, you will want to properly support the tank. When everything is working properly, there isn't a lot of weight, but eventually, the ET will fail, fill up with water, and at a bit over 8#/gallon, the things can get pretty heavy...you don't want it just hanging or pushing on the pipe without support. It doesn't hurt to have the connection up so when it does fail, when loosening it, it doesn't dump all of the water all over you, either! The things will work in any orientation, though, but do support it so it doesn't bend your piping or stress fittings, etc.

So this takes care of the heating system

Incoming pressure reduced to 50 # will elevate water to 115.5 feet which is more than enough pressure and yet low enough to prevent erosion or hydraulic shock

"As a result, water utilities have been retrofitting check valves to prevent that from happening"

A check valve is NOT considered a backflow device for the water mains.

See below what we were required to install

Boyle's Law describes what happens when you compress a gas while trying to minimize changes in the pressure. You'll note from the graphic below that when your initial volume starts out relatively high compared to the end value, the rise in pressure is closer to horizontal meaning that it takes more volume change to create much pressure rise than if the volume already starts fairly small. This is the reason why it is important to size your expansion tank properly...you want to minimize the pressure rise overall when the expected volume changes. To minimize the pressure rise as the heated water expands, the tank needs to be sized properly. And, if sized properly, the pressure doesn't rise very much. Use too small of a tank, or raise the precharge above where it should be, and you move your starting point further to the left of the upper right graph...meaning, the pressure will rise lots more than if you started further to the right with the relative starting pressure/volume relationship. 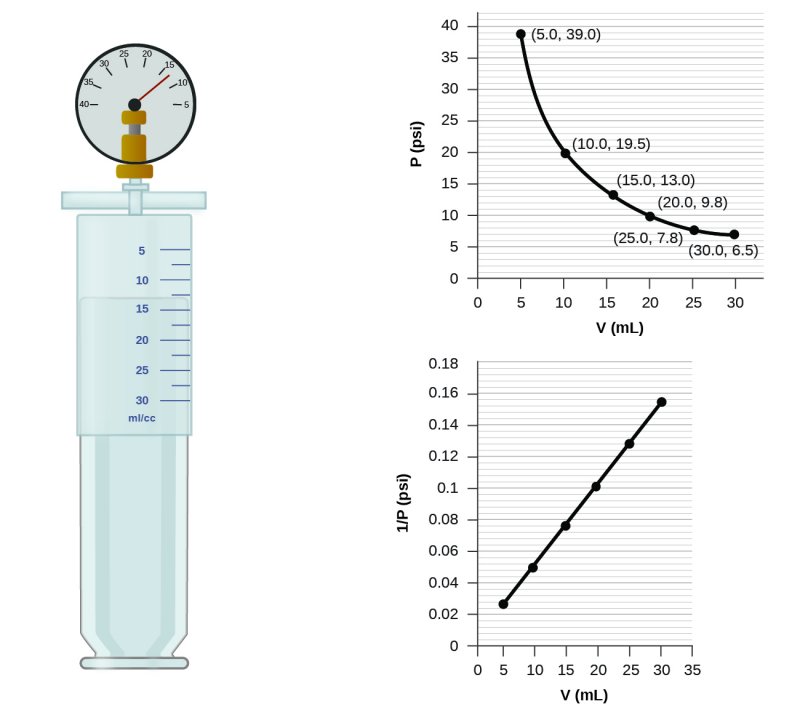 The old timers used an open tank in the attic no moving parts and never failed and always had positive pressure that was constantant
You must log in or register to reply here.

S
I have two experienced plumbers telling me two very different things about my domestic well and water system -- settle the debate?