We recently discovered leaks into our finished basement. Not gushing water, but enough seeping in to cause mildew smell, mold on the back of drywall and rot some stud wall sill plates.

At first we thought it was a leaky foundation, so we demolished interior walls and excavated an 18" wide trench on the outside. We saw the primary issue was our next door neighbor’s yard, where he had soil and big bamboo plants against and above our foundation and against exposed wood (this is an old house). Holes from roots and rot allowed water in. These plants and soil have been removed. To keep the lower soil grade against our foundation, we’ll maintain that trench between and build retaining wall on the other side of the trench to hold up the neighbor’s higher grade.

We got a professional opinion that there is no water entering through the foundation or floor, so, theoretically, problem solved. The question is - how we backfill the trench to encourage proper ongoing drainage? French drain, soil, gravel, rock, something else?

Attached are some pictures showing the situation. The plastic shown in the later two pictures is temporary covering for the exposed foundation, which is shown in the first picture.

Some contractors insist we need a $20K-$30K french drain system. Others say we can just waterproof the exterior foundation wall since we have access, then backfill the trench (both much less expensive).

It doesn’t rain a lot here, except during winter, when every few years we get rain heavy enough cause sewer backups. In our case, water runs downhill alongside/parallel to our foundation, not towards. Roof gutter downspouts overhead are connected to city drain pipes. Soil is pretty packed with a lot of clay, but it does drain.

My thought is backfill that trench with the drainage gravel they use over French drain, and keep soil off of it. My concern with that is that water spilling down the hill and over retaining walls could overwhelm the trench, which would drain more quickly than the soil.

Wow that is bad. I would remove all paintings and lower the grade up to the lot line. Build a retaining wall with cement blocks to hold back the earth. Fill the trench, about 1/2 up with stone and buried a corrugated drain pipe to a sump pump. You want at a minimum 6" of clearance above the ground level of the rim joist. Removing all those planting along the home wall keep the moisture away from the house. The house needs air to breath. There could be rotting wood behind the sheathing. If you leave it as is, you need to build some kind of wall otherwise the dirt will migrate toward the house.

I just did this to my home this past year. I was having pavers installed and had one area with standing water and I could not allow my run off to my neighbor's yard, that was a few inches lower. Even with gutters there was still too much standing water. I buried a drainage pit (16x16x14.5) and installed a sump pump. I ran the discharge hose over 40 feet away on the surface to where it would drain away from the home. I buried a second drainage pit (smaller) to take care of water about 5' feet away and tied it the the pump drainage basin. Other than the discharge hose and check valve, I bought the basins and pump from ZORO.com. I later on buried the discharge hose to another drainage basin system where gravity took it to the street. The pump power cord I ran it inside left over 1.5" discharge corrugated pipe to a nearby GFCI outlet. The system works great. 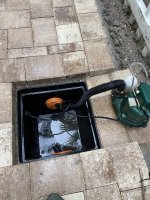 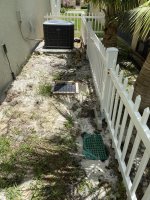 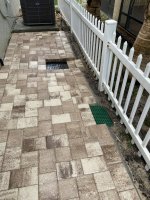 In fact, it can all be done quickly; the main question is whether you have enough time to do it right away. It would be easier for me to take a vacation and finish all the work in a week than stretch it out for several months. So you are already looking at your capabilities and whether you want to rush at all. I can advise you to order the necessary equipment at https://www.machinerydealer.co.uk/ since I know that this is a verified site. The rest is up to you; I wish you good luck and a lot of patience to finish all this work.
Last edited: Apr 30, 2022

This isn't enough foundation to waterproof. Your basement walls would need waterproofed. It looks like you have a very small ditch which isn't deep enough to do anything close to waterproofing with. I think I would stick with the above recommendation.
You must log in or register to reply here.

How to connect basement surface trench drain to sump? pics.

Amount/purpose of gravel around drain pipe

Back to Back Sink Plumbing/Venting Help

Variation on a French Drain?