Power Panel Surge Suppression and Why You Might Want One

Some people buy surge suppressors for things like their computers, and some might put them on their stereo or other devices, but today, many many devices have electronics in them to include stoves, refrigerators, microwave ovens, and, well, sometimes even an exhaust fan might have electronic speed controls.

So, where does that leave us?

A little info can help. The junctions in solid state devices generally don't like voltage spikes. And, just the power on/off cycling can be an issue. A power failure, when power is restored, can fluctuate considerably before it stabilizes. Ever had the lights flicker a bunch of times when things come back on? Ever noticed that all light bulbs tend to blow when you first turn them on? Those are much more robust connections than solid state devices. Well designed ones tend to have some built-in protections, but that costs money, and shortcuts are sometimes made. People have also gotten more in the mindset of just replacing the things when they start to act funky, and just accept that they don't work as reliably as they used to.

Well, there are ways to help change the odds of keeping things working longer in your favor...putting some surge suppression on your power panel. Some are designed to attach to the input power leads and they can work well, but what's adequate for most people is one designed to attach to a dual-pole breaker so it can hit both L1 and L2. Pretty simple to install, but working IN a power panel can be dangerous if you don't know what you're doing, and don't use some protection gear in the process. But, basically, many of these are designed to mount to the outside of the power panel through a knock-out, then the three leads get attached, N, L1, L2. L1 and L2 go into the new breaker, and the neutral goes to its bus connection. Most of them have an indicator LED that illuminates to tell you it's working for each of the power leads...if it ever shows one of the lamps out, that means it sacrificed itself and is no longer providing protection on that leg of the power, so it's easy to check it's working or not.

Lots of companies make these things. What you're looking for is a high surge current rating, and a short response time.

I've used this one at my mother's house after her microwave and refrigerator were damaged after a near hit by lightning...lots of storms since, and things have been stable since. I installed one over 30-years ago on my power panel, and my neighbors have had to replace some electronics over the years, but I have not, so while not an absolute guarantee of success, it seems to have worked for me. INS-730308-ST-NEMA.pdf (mersen.com)


If you're not versed in dealing with work on a power panel, pay someone that is to install one for you, but it's no worse than adding a new circuit.

Most have recommend a surge protector for some time and the latest NEC now requires it for the service. Some new panels from Eaton come with one built in and most manufacturers have ones that take the place of a two pole breaker. They are simple to install as all you need is to snap it in and attach a pigtail to the neutral bar. They do have lower ratings than the Mersen mentioned above but some have argued that the effectiveness is about the same.

Yes, if your panel is new enough, there are devices that snap in like a new breaker and that would probably be the easiest install, but it's not much to install one through the knockout.

I wasn't aware that newer codes require one. Seems reasonable as it's a small cost for potential large benefits.

A typical meter panel for Florida and most homes on slabs. It's 150 amp panel and the main breaker panel is in the garage, may be 50 feet on the other side of the home. I installed the surge protector last Aug. and just checking it since lately we've been having our typical summer electrical storms almost daily. 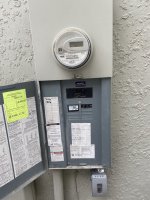 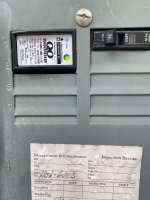 Mine's external to the panel, and that panel is about even with the driver's door when parked in the garage, so I can see the status leds each time I get in or out of the vehicle...it's good to monitor. Mine has an indicator for each leg. One's fine, as you'd want to replace it if it sacrifices itself, and monitoring that indicator(s) is what tells you if that's necessary. When I installed mine, not sure if there was an in-panel version nearly 30-years ago.

I'm also in the same situation.

I have an Eaton 100 amp panel built into a wall and it has no open slots. I've installed a surge protector before, but haven't been able to find one for the Eaton box which doubles as breakers so I could replace two of the breakers with the surge protection also. Suggestions?

Hunter01 said:
I have an Eaton 100 amp panel built into a wall and it has no open slots. I've installed a surge protector before, but haven't been able to find one for the Eaton box which doubles as breakers so I could replace two of the breakers with the surge protection also. Suggestions?
Click to expand...

Eaton does make them but I'm having a hard time trying to find a stock number.

Hunter01 said:
I have an Eaton 100 amp panel built into a wall and it has no open slots.
Click to expand...

If you have other limitations where slots would help, consider putting in a new 200 amp main panel and make the existing panel a subpanel.

This would be for the case where you would like to have more circuits.

I'm 'of the age' where I live in a condo and don't foresee a need for more circuits at this time. Was kind of disappointed to have a full 100 amp panel, but otherwise liked the condo.

I live in a condo as well, but when I was remodeling my kitchen, the codes required lots more circuits, so I had a subpanel installed. Mine is also a 100A panel that I wish were larger. I've owned an EV or PHEV since 2014, and I'm pretty much maxing out my panel's capacity. I'd consider an inductive stove, but don't really have enough current to install one!

WorthFlorida said:
Eaton does make them but I'm having a hard time trying to find a stock number.

Looks like Eaton has the combo breaker surge but only at 30 or 50 amps. They are expensive and, of course the CH style is even more.

FWIW, that price isn't bad compared to an external box and if you then add the installation costs, might end up cheaper.
You must log in or register to reply here.

Thought I had a bad GFCI but something else is going on - Help!