in indiana
currently have a 40 gal tank on its last leg,
well water with pressure tank.
softener.

I asked for the disadvantages to a tankless and he said there really weren't any beside getting one undersized that you really can't oversize one. he said some whom undersize get 5-10 seconds of cold water mid shower if it can't keep up.

I know ill have to change to pic vent and fresh air through the roof If I go that way and im ok with that in the spring when its manageable to make the cuts..

I guess overall looking for some opnions on switching to a tankless. thanks

Has just a home owner and not a professional plumber. IMHO the biggest thing your going to have to do is more maintenance. Especially from what I hear with well water. I have a NCB-240E for heating and domestic water, and just like the one I had before. My inline filter gets replaced every 6 months. $28.00 for an Aqua-Pure 431. I don't know what type of filter you use for well water. Then there is descaling the unit with Vinegar. I am on city water and my old unit needed it every 6 months. Or my Domestic side hot water would start to get cold. That was with a Quietside DPW120A. I am sure I am going to be doing the same with the Navien. If you could do it yourself then it's really no big deal. Once you buy the pump and hoses you need to use to clean it. You can put the intake and exhaust vent through the side of your house. It really doesn't have to go through the roof. I guess it depends on what type of house you have and city or village codes.

In reality to me just to put a tankless water heater in when you have a NG, Propane or a oil fired boiler in good condition is a waste. Just replace the water heater with what you had. If it worked for you. Unless your trying to make some space. How old was the water heater you have? Does your boiler still has a lot of years to go. Or is that going to need replacing in a couple of years. Then it might be worth doing a modcon tankless unit. But that opens you up to other problems if you want 90-95% AFUE to heat your house at low water temp for it to work right.

A 199,000 BTU water heater will not be a problem giving you enough hot water. I have 5 people living here. I can run a Shower, Dishwasher or washing machine at the same time. If someone turns the hot water on from a faucet or flush a toilet. It doesn't phase my hot water. I even was taking a shower and the washing machine and dishwasher were on at the same time. I didn't even know it was all running at the same time. Plus the shower was up on the 3rd floor 32 ft vertical from where the tankless unit us. So depending on your family size hot water isn't a problem. Pressure from a well, I have no experience with what might happen. There are some posts here about wells and tankless units if you do a search.

Then the last thing is savings on your fuel bills and water bills. Depending on water and fuel costs in your area. After cost of the unit and extra installing you might not be that much more in the $$$$. Then if you put a regular water heater back in. Unless you plan on living there 20 yrs. Or for the resale value, or for some person who buys it thinks they are saving the world from green house gasses.

Person who thinks they're saving the world from greenhouse gases here.

I got a Navien 180S without recirc a year ago, after a lot of research, and it's been great. Wish I'd had something like this long ago. It's just -- bam, hot water, no problem. I don't live in a mansion, and I don't have four people trying to take showers at once, so the 180 works fine here, and I don't mind waiting the five to 15 seconds it takes for the hot water to get to the faucet. The limescale problem is solved by doing maintenance, but it helps to soften the water before you put it through the heat exchanger -- I have a Stiebel-Eltron TAC filter so I don't have to deal with salt. The only thing about that is that you have to make sure whoever is installing the Nav actually reads the TAC install instructions first. (My guy refused, insisted he knew everything, and his boss wound up paying for a replacement filter.) You should still do the maintenance once a year, but then you should be doing maintenance on all your major appliances. Descaling's not a big deal -- you just take off the cover and use a vinegar solution, use a couple of buckets. If you're rich, pay someone to come do it for you. But yeah, instant soft hot water that doesn't run out, I feel like we were living like animals before. I also have 1.8 gpm showerheads that are better than the fat lines I had before -- Sierra is the brand. Very strong flow. And low-flow aerators on the other faucets as well.

I replaced my furnace at the same time, and between the more efficient furnace and the Navien I've seen a substantial drop in gas use here even though we're home all the time during covid and we live in the deep-freeze of the upper midwest. I'd expected and am seeing about a 20% drop all told. Of course, gas is cheap. So if all you care about is dollars, and you're convinced that the only thing that shows you're smart is that you make big piles of them, you'll find plenty to grouch about in the very long payback time here. While it may boost the house price a bit on resale, I'm guessing it's not that big a deal unless you're selling to younger people who are coming to expect tankless in new builds. More like a penalty if they feel like they have to replace an obsolete tank.

The only thing I worry about with the Navien is that anything with a computer in it is vulnerable to power interruptions, software obsolescence, etc. The weather is not going to get less violent. I don't have a backup generator, but do have solar panels, and am considering getting battery storage. I'd rather wait, though, till the battery technology improves -- the work with the combination of charge density, rechargeability, size, and safety has a ways to go.

Between the solar panels, furnace, and Navien, and doing less driving, I reckon we avoid putting 250K lbs of CO2 into the air over the next 20 years, and overall we come out slightly ahead financially (including the financing costs), which I figure will actually mean it's about a wash dollarwise. Short of making the walls thicker it's probably not going to be possible to make this continental-climate suburban tract house much more efficient.
Last edited: Mar 10, 2021

Naviens are pretty good, provided it's installed correctly, and serviced at least every year or two. Pay attention to the manual, particularly on location & separation of venting and air intake ports- they (like other condensing burners) will self-destruct if it's sucking in it's own fumes.)

The primary benefit of a tankless is reclaiming some floor space. It'll never pay for itself in fuel savings, especially after factoring in the cost increased maintenance schedule. The "endless hot water * " claim should have an asterisk next to it:

If you have big spa tubs to fill (you probably don't if you've been living with a 40 gallon tank), it can be an exercise in tedium compared to a properly sized tank water heater.

Other options to consider would be a 50 gallon heat pump water heater, which would be about as cheap or cheaper to run (depending on your gas & electricity rates) and maintain than a tankless and it would dehumidify the space where it's located (or ducted to). If you have a full basement that needs mechanical dehumidification to keep "musty basement smell" at bay, a heat pump water heater does double-duty, taking a good chunk of the load off the dehumidifier/air conditioning. (The newer ones are now quieter than the average refrigerator and are now a mature reliable product- don't get stuck on early reviews from a decade ago on noise & reliability.)

If you're a showering family and have access to at least 4' of vertical drain downstream of the main shower a drainwater heat recovery heat exchanger could (more than) double the effective efficiency of any water heater during showers by returning half or more of the heat that is literally pouring down the drain back into the incoming water stream that's feeding both the cold side of the shower and the cold input to the water heater. That is enough of a boost to turn also a plain old tank gas water heater into an "endless shower" experience at ~2 gpm. It would also boost the as-used efficiency of a Navien to well over 100% in showering mode, and probably over 100% as an average efficiency. In combination with a heat pump water heater it would also extend the "apparent capacity" of the tank during showers by at least 25-30% . 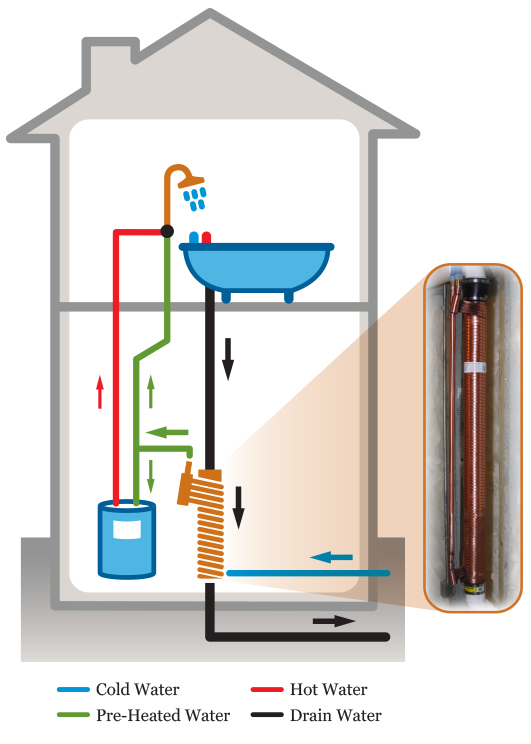 If you are one of the 27 houses left in Indiana that still does space heating with a hydronic boiler (pumped hot water with radiators, radiant floor, or baseboards), an indirect fired water heater running off the boiler will usually deliver a net boost in combined as-used efficiency for about the same installed cost as a tankless, delivering higher peak flow rates than you can get with a tankless.

Responding to Chris and FDNY.
You must log in or register to reply here.

Can I install my own tankless water heater Navien