Well, it looks like Toto is coming out with (but has not yet shipped) three new designs. (As with the original 1G, the stuff gets announced months before it is actually available.) 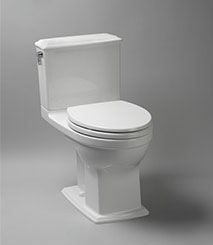 A brand-new "Connelly" toilet, which will be "Dual-Max Cyclone" (.9 and 1.28) like the Maris floor-mount.. The Press Release says "skirted bowl" but it doesn't look like a typical Toto skirted (those look like closet bolts there), so who knows; also, the trapway looks kinda short, but I guess we shall see... 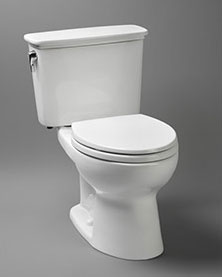 A hard-to-get-used-to new tank for the original Drake 1.28 version. 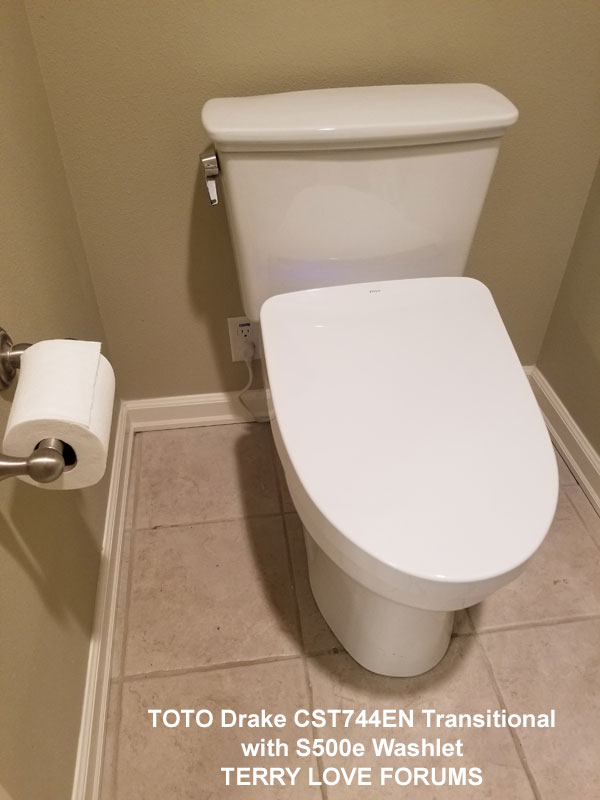 Upon further review, it appears that Drakes with this new tank are available to be ordered, if not heavily in stock at many places. The MSRP is about $30 more than the unit with the old tank. The new model numbers are the same as the old model numbers, with the exception of an "N" added to the model. So, whereas the elongated original Drake with the old tank is CST744E in the 1.28, the elongated original Drake with the new tank will be CST744EN. And so on. They are also making a version of the new tank with a right-hand trip lever, but it's unclear whether they will be making the bolt-down lid, insulated tank, etc. SPEC SHEET FOR CST744EN Whereas the tank was model number ST743 for both the CST744E (elongated) and CST743E (round) -- i.e. there was no ST744E tank -- the new tank has been given model number ST744E for use on both the round and the elongated bowls.

One other oddity about the new tank is that the spec sheet now claims that the space between tank and wall on the Round Drake is between 5/16" and 1" and on the Elongated Drake is between 1/2" and 1-1/8". That's a huge variance, well beyond any kiln-error numbers. As you know, the CST743E tank regularly left 1" to 1-1/8" between tank and wall, allowing this toilet to be squeezed in on irregular rough-ins. I don't know what the point of that spec is, except perhaps to suggest that if you back the most-protruding portion of the base against the wall, there will be 5/16" behind the tank, and otherwise a full inch? It's really quite unclear. 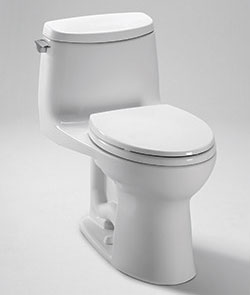 An Ultramax II that uses only 1 gallon per flush (like the Drake II 1G). http://www.totousa.com/Press/PressReleases/UltraMax1G.aspx Note that Toto feels compelled in its press release to slam the pressure-assist technology, implying that it is dangerous. A little over-the-top stuff from the marketing department, I think. http://www.totousa.com/ProductDetail.aspx?ProductID=1285
Last edited by a moderator: Aug 22, 2020

Well, while an infrequent thing, I've never heard of a gravity flush toilet flinging porcelain shrapnel at anyone, but it apparently has with a pressure-assisted toilet. Agree, though, that it is rare, and solved if people actually heeded the recall (although I wouldn't be too confident in the installation rate of the retrofit kit).

lordmoosh said:
How well do the 1 GPF toilets like the Drake II 1GPF work? Any reviews?
Click to expand...

There aren't a lot of reviews of the 1G around the Web, but the ones that are there are 100-percent-universally-fabulous. Comments like, "The best ultra-low-flow made. Never needs a plunger." "Can't believe it flushes this well on one gallon of water." Stuff like that. Of course, you have to consider that folks who will go out of their way to buy the 1G version are going to be predisposed to accept the limitations of a one-gallon flush. Unlike the many reviews we see here where people mention that they usually hold down the handle of their toilet for a "full flush". (Sigh.) I'm fairly confident that if you forced every toilet buyer to buy the 1G, you'd get complaints about bowl rinse or questions about how to make it do a "full flush" (i.e. 3 gallons). But for people who want to save water, I think the reviews suggest that it's a winner.

Cool. The only danger is that the 1G system, as installed in the Drake II, replaces the simple flapper flush valve and standard trip lever. Instead, they have a gear-thingy on the trip lever that's connected to a wrapped wire that's attached to a flush-tower assembly. This apparently is to more-precisely-control the flush. It may be that the hole in the porcelain is the standard size that's used in the Drake II (although the 1G tank itself is a different shape from the standard Drake II), and thus you MIGHT be able to use the Korky 3" flush valve replacement kit and a new standard trip lever on it if you hated it, but I'm not sure. It's just less of a backup plan than one currently has available with the 1.28 system, which can be easily converted to flow a little more water per flush if necessary. We haven't found the need to do so, so I guess this is conjecture, but it makes the decision a no-brainer if there's a way to reverse it if it sucks. That said, as I say, the reviews have all been very positive, including one that I think someone posted on here with pictures. Okay, found it -- start looking at post #12 for photos and some comments by a guy who bought and installed one (you can see the interior guts in his photos): https://terrylove.com/forums/showth...is-up-on-the-Toto-Web-Site&highlight=drake+II 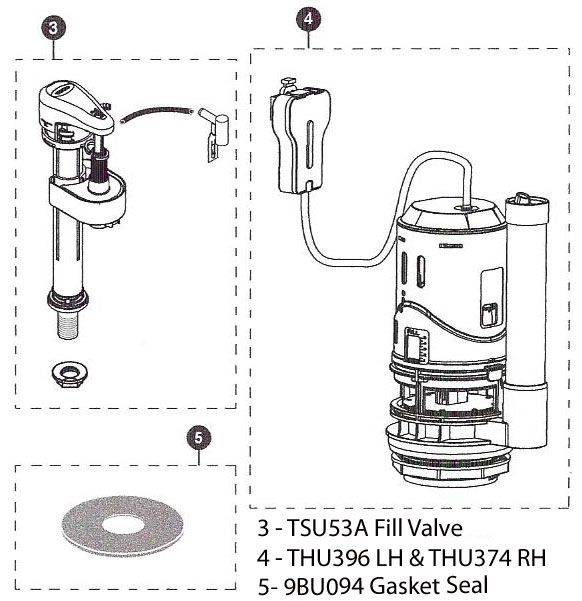 UPDATE: It looks like the Cotton White version of the new-tank Eco Drake, CST744EN and CST743EN, is now in stock at HM Wallace, a major wholesale master distributor, which suggests that it is now available at a number of wholesalers' warehouses.

does anyone have any reviews on the Connelly?

I'm ordering 6 toilets and considering these, but can't find much info on them. It looks like its only been out for about 1 year.

My other option is a Drake II.

I have a Soiree and love it, but don't like the plastic rough in and the dripping noise that you get with it.
Last edited by a moderator: Jun 25, 2014

The Connelly is available, but doesn't seem to be in wide distribution. It has the dual-flush, and thus a more complicated flush valve; not just a flapper.

A hard-to-get-used-to new tank for the original Drake 1.28 version.

... The new model numbers are the same as the old model numbers, with the exception of an "N" added to the model. ... Whereas the tank was model number ST743 for both the CST744E (elongated) and CST743E (round) -- i.e. there was no ST744E tank -- the new tank has been given model number ST744E for use on both the round and the elongated bowls.
Click to expand...

I think that the new tank is hideous. I just hope that they will never put them on the Drake toilet. (Well, they are if the info above is correct). If they're going to do that then I think I had better order a CST743R or CST743SR now. My fear is that since so few order a right hand tank that it would be quicker to make the new 'N' tank with the right hand flush since it's a special order.
Last edited: Apr 14, 2014

Why isn't there a Drake Round with CEFIONTECT? Not that it would matter - not if it came with that new bowl.

Wallijonn said:
Why isn't there a Drake Round with CEFIONTECT? Not that it would matter - not if it came with that new bowl.
Click to expand...

Most rounds bowls are bought because they sell for less. You won't see many upgrade features on round bowls.
TOTO does make a CEFIONTECT round bowl in the Promenade.

Terry said:
Most rounds bowls are bought because they sell for less.
Click to expand...

Unfortunately, not in my neck of the woods. Here I was quoted the same price for the regular height round bowl Drake as for the ADA elongated Drake - $250. Even the plumbing house salesman found it odd. Which probably means that if I want it in a right hand flush handle it'll be over $280. I'm almost afraid to ask...
Last edited: Apr 22, 2014

A right-handed flush handle is often only available in an ADA version of the toilet. The ADA rules require the flush handle to be towards the door entry-way to the toilet stall (IOW< not up against a wall) so that someone on a wheelchair can access it easily. So, to be fully ADA compliant, you generally need to make the toilet in at least two versions.

jadnashua said:
A right-handed flush handle is often only available in an ADA version of the toilet. The ADA rules require the flush handle to be towards the door entry-way to the toilet stall (IOW< not up against a wall) so that someone on a wheelchair can access it easily. So, to be fully ADA compliant, you generally need to make the toilet in at least two versions.
Click to expand...

True, but in the case of the original Drake, you can attach the original Drake right-handle tank to any original Drake bowl. So it will go on the round-front, the ten-inch, the elongated, the ADA-height, the CEFIONTECT version...all of them. But that's because it's a two-piece and these other features are features of the bowl, not the tank.
You must log in or register to reply here.