I've been researching for a few days now for a replacement toilet, I'm overwhelmed. I have a round toilet in a basement bathroom that once in a while the flapper gets stuck at like 20% of the time it clogs so I want to replace it.

I started with looking at the Glacier Bay Powerflush....I see a lot of people saying Glacier Bay is crap, but that the power flush model is not bad, then I start seeing people saying you can't use a plunger on it and some people complain about the water level in the bowl being too low.

Some people say the American Standard Champion Max 4 is amazing, but then all the reviews I see the tank cracks etc...Consumer reports lists as their number 2.....

From this forum people say the Toto Drake II, but I didn't notice any vacuum assisted or pressure assisted flushing. Also my sister has a round TOTO and its like the smallest toilet I've ever used so I'm worried their toilets just run small.

I was hoping for either vacuum assisted or pressure assisted plumbing with a larger than average trap diameter and only 1.28GPF

Its for a basement bathroom that is not our primary bathroom so it doesn't need to be beautiful.

I was hoping to stay around the $300 price range but I know you get what you pay for, I Just don't want something that I have to replace in a few years.

my TOTO round from 02 I think works better than most I changed one out with a new Toto round might have been a drake its the basic one looks good ,its ok . I think the older worked better but spending a ton remodeling the bathroom just figured a new toilet be nice. got a couple of Kohler Wellworths I pulled from other houses elongated and installed in my other bathrooms I like those they were like new and free so why not.
Last edited by a moderator: Sep 28, 2022

There are two seat sizes, round and elongated, with a 1.5" difference in length.
If you have a round bowl with round seat, it doesn't matter what brand it would be, same for the elongated bowls.
A toilets have improved over the years. I'm not a fan of the Champion though. If you're thinking American Standard. their Cadet 3 and Cadet Pro are better.
Kohler has the Wellworth and Highline which work well.
The new TOTO Drake, CST776CEG and CST776CEFG taller bowl work very well.

Like most economy "house brand", stuff Glacier Bay is junk--the porcelain is substandard and stains/erodes in just a few years--spend a bit extra and get American Standard or Kohler. Just this year I replaced two stained and pitted (pitted in the outlet elbow, affecting flushing) 6 yo GB toilets with American Standard Cadet Ovation elongated units; both work fine: 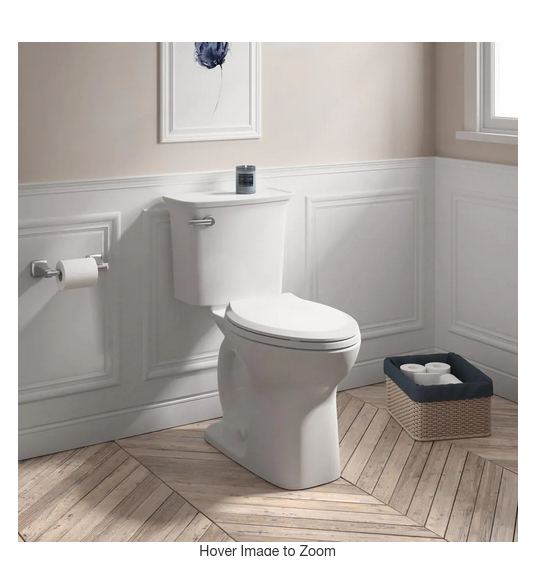