I picked up some more PEX to run more cold water lines and was going to have my friend come over to finish hooking stuff up, but we are both having to quarantine (separate exposures at different locations but from the same people). Hopefully we won't get sick, but friend's gf is already sick. Could be flu though.

Anyway, I'm probably going to work on the shut off valve and outdoor faucet within the next few days. I need to cut weeds near the back door to make it easier to access the underside of the house. I also need to focus on fixing another bathroom in the house so we can fix up the main one.

We still haven't finished running all of the PEX. I'm too fat to fit under some of the areas and my friend has had health issues. Have not heard back from the local plumber.
But the windows for laundry room and bathroom came in. I found them on sale. Double pane energy star rated with argon. We will probably have to hire someone to put them in.

I've had some health issues that have made it so I couldn't get out of bed for a couple weeks but am doing a little better. Also have two new rhodesian ridgeback dogs (rescued) that we are trying to rehome.

I still need to look at the joist placement to make sure I can fit plumbing where I want it.

After I clean up my Ensuite a bit more, I will try to get started on this project again.

I was looking at my diagrams for the plumbing layout and realized that the drain pipe for the washing machine might get in the way of accessing the dryer vent from behind the machine. It's an exterior wall so I'm not running the pipe through the wall- I'm having it against the wall behind the machines. My state's plumbing code allows for 6' run of a 2" trap arm and its less than 6' to reach the wall. Now, I could run it all the way into the wall if I could get it to go through the floor there so I can have the vent pipe meet up with the main vent stack more easily & with fewer fittings. I could put the cleanout sticking out of the wall a bit. Or, I could just put it next to the wall and have the cleanout facing a different direction to make it easier to use.

I'm also re-evaluating my thoughts of putting shelves level with the washing machine/dryer behind them and am thinking of putting an acrylic sheet/plexiglass over the top and extending it all the way to the wall so it will cover the gap between the machines & the walls. I can have ledgers to support it on the walls. It can have some sort of bumpers put on it to keep it from sliding, but if I need to remove it, I can take it off to access stuff. I'm also thinking of lower the laundry box from the sketch and having it recess slightly into the wall. The plexiglass can be notched to go around the box but still allow access to the shutoffs.

I had to move the height of the trap arm for the standpipe so it won't get in the way of the dryer vent. I'll put some sort heat barrier insulation between the pipe and the vent just in case.

This is my rough sketch thus far (I haven't rounded off the plexi sheet in this sketch or done any notching. If there is enough room, I may push the box closer to the side partial wall so it will block stuff from falling behind it into a hole for the washing machine plug-- which will be GFCI and placed above the box. 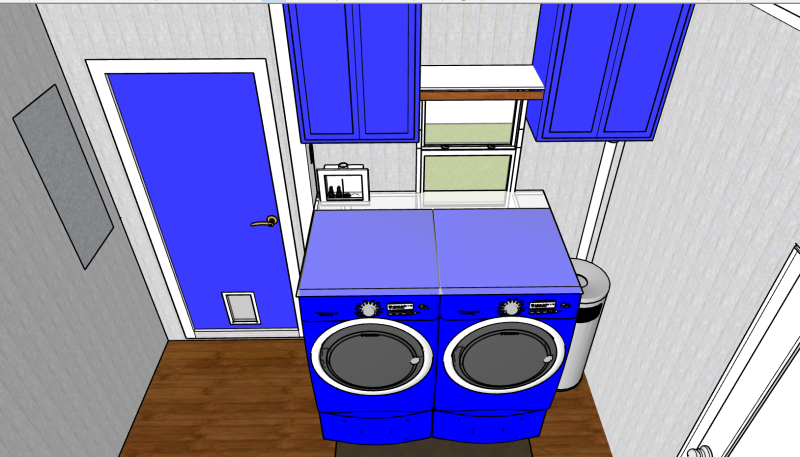 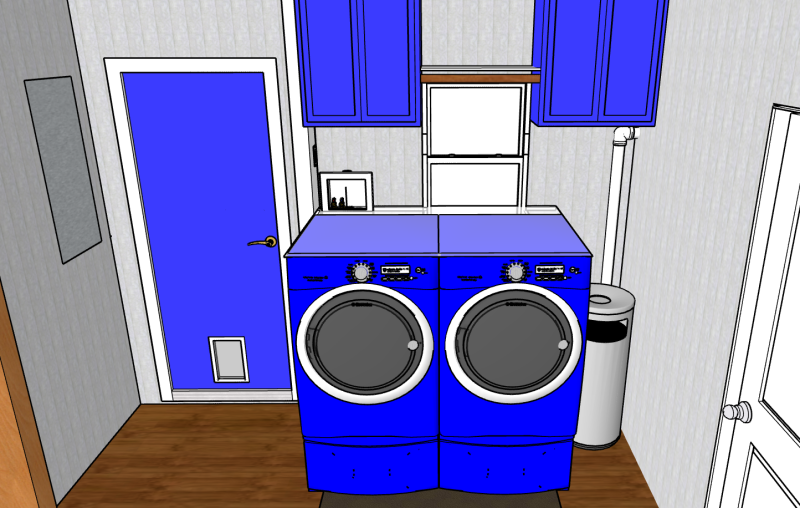 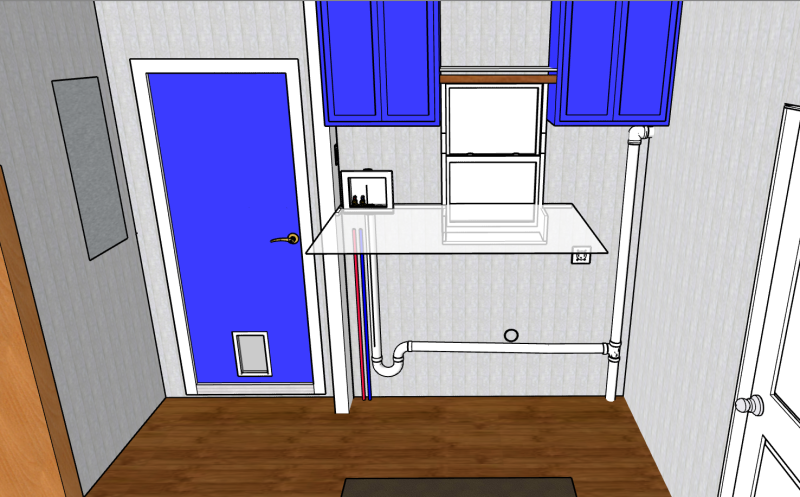 I need to find the 2" cleanout fitting sketchup model to add in, but it would be on the pipe to the right. I could always merge the pipe in lower. Need to locate studs as nothing was done properly in this house.

I'm considering this instead of plywood because it will allow the color of the machines to show through and allow the light to come up from the window. It will also make it a bit easier to see under there.

Another question: How should I go about doing the pipes for the toilet and lavatory. They are on an exterior wall that runs parallel to the joists. I know that on some of the house there is a small pocket above the beams (running perpendicular to the joists) that the joists sit on) but I don't know what the situation is with the parallel walls and whether or not its just solid wood down to beams or if there is anything that can be drilled through. The house sits on concrete piers and the height from the ground varies. There is also a skirt that extends below the house almost to the ground. The main vent stack is in the interior wall not far from where I want to put the laundry. I'm not sure if there is enough head-clearance inside the attic to access a vent from the top of that wall.
This is a crappy sketch of two possibilities for the sink drain, but I'm not sure on the toilet: 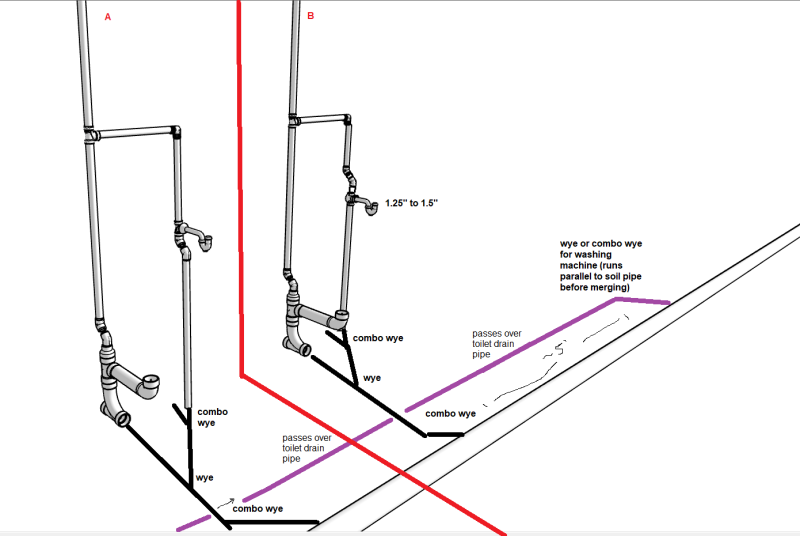 I was told the washing machine needs to tie in at least 5' downstream of the other fixtures for suds relief.

But, I just had another idea: Maybe I could run the toilet's drain toward the interior wall and run the vent up into that wall & try to fit it in the same stud pocket as the shower or in an adjacent pocket. I know that wall can have pipes go through it since it has the main vent in it. (And when I said vent stack, I meant loosely-- it is the ONLY vent but the only thing tied to it is a toilet that will be removed). I plan to run the toilet, tub, and washing machine to it. I *think* it is 2" diameter but am not certain.

As for the lav, I will probably have to have a separate vent for it and have the drain go through the floor inside the room behind the vanity (I plan to bump the vanity forward a bit). There is already a rough-in cut for drain & water supply for a utility sink, but I want to move the drain back more-- it was roughed in for an S-trap. I will do what the plumber did on the circuit vents-- run the pipe up the wall then horizontal around the eaves and then back up again. It's ugly, but better than no vent. I can tie the sink's drain in to the toilet's drain on its way to the main soil pipe (less cutting in to that nasty old soil pipe that way).

My question is: Should I add a 45s to the drain or to the vent part? I'm not sure if 45s on the vent would obstruct airflow, but I also want as clear a path as possible for the drain.

What would you guys do?

Ok, so I looked up the plumbing code and saw that the UPC codes for suds relief (could not find equivalent in IPC codes) have exceptions for single-family homes and less than 3 stories of fixtures. My house fits both. Furthermore, as of the year 2000, high efficiency machines no longer produce the suds so suds relief is no longer a concern. That means I think I can tie my washing machine in as the very first fixture.
First would be the washing machine tying in at the very end of the existing pipe and having a cleanout at the back. Next the kitchen sink would tie in and then tub a little past that. Toilet would follow and then lav. Then it would go toward the septic tank and the two other bathroom groups would tie in downstream.
My rough sketch. My kitchen sink's vent pipe currently comes out from under the house (it has an S-trap) and wraps around the window and terminates under the eaves. I will need to extend it around the eaves with a couple of 90s. 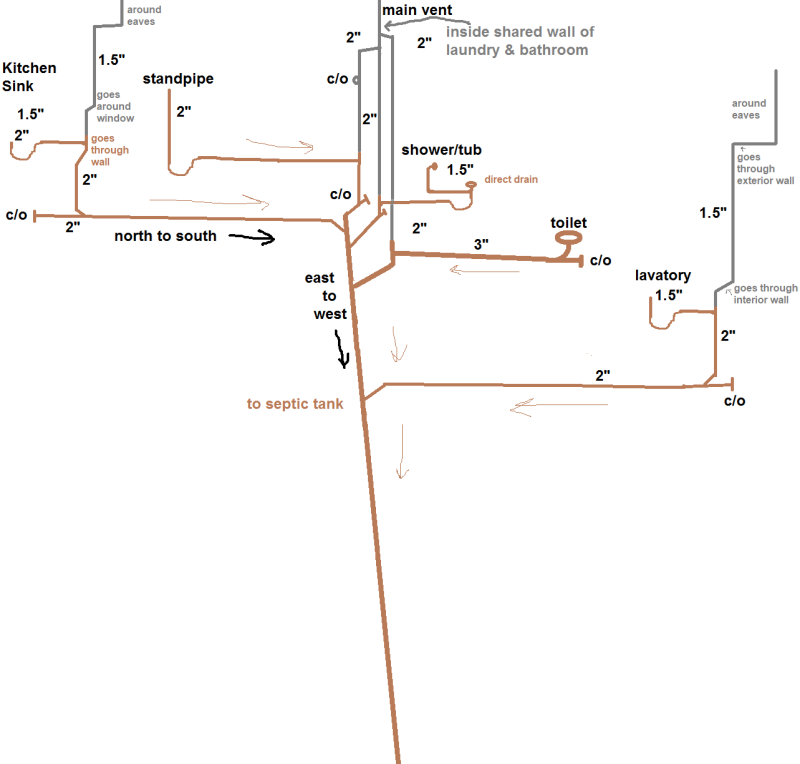 Plumbing for a very small bath