Looking to a 1-piece ADA toilet in a small bathroom.

Everything costs more nowadays. So I looked into this Swiss Madison St Tropez 1-piece (side-flush) toilet. It's a heavy toilet at 107lb. It has a Vortex flush similar to Toto's tornado flush. It uses a 2" flapper. 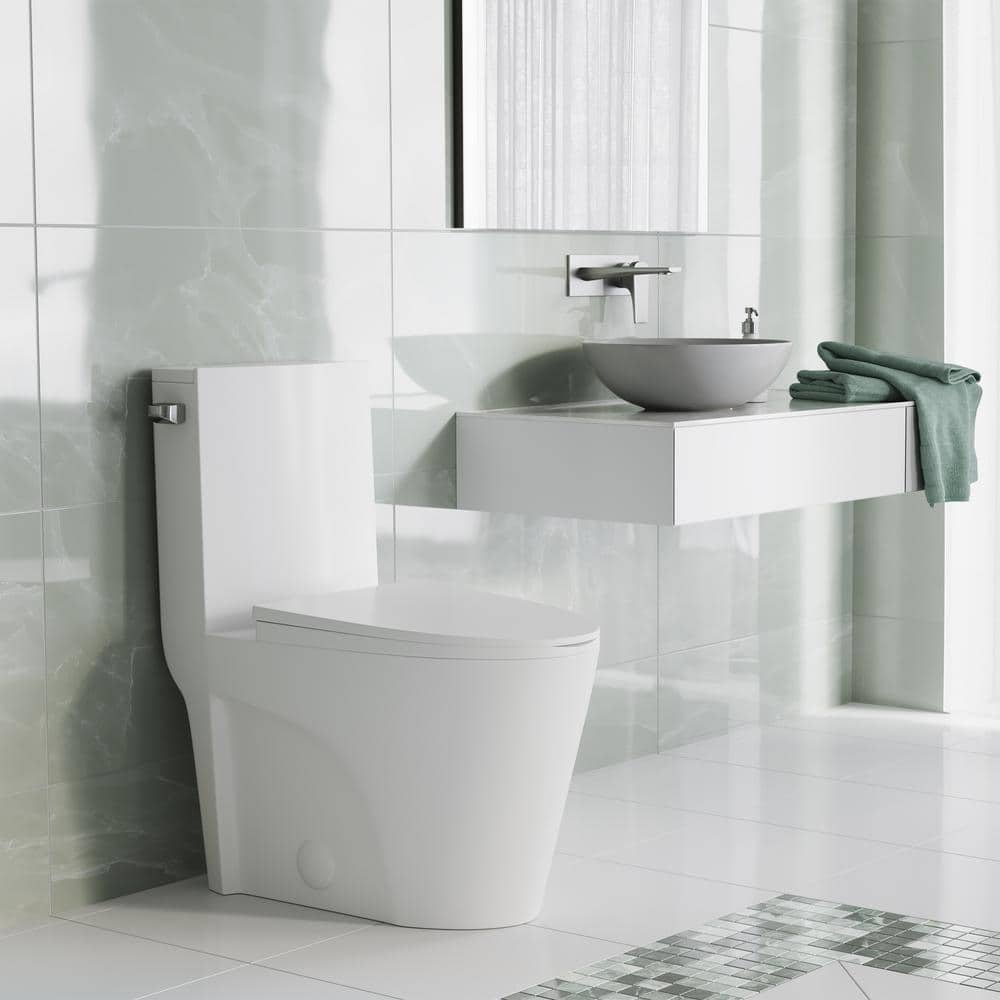 
What I didn't notice was the tight space due to the fully-skirted design.

With a 12" rough-in, the bottom of the toilet's side wall is only about 3.5" away from the back wall, and it's around 6" from the center of the rough-in.

The water valve to the toilet in the bathroom is about 5 1/2" above floor and would be exactly behind the side wall of the toilet with about only 1" space from the side wall. 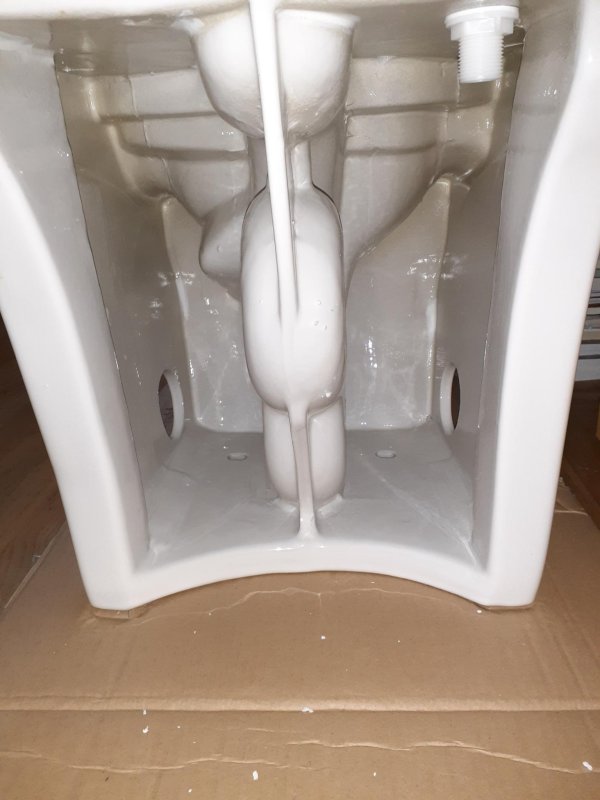 I can still install the toilet, but with this tight space, I wonder if it's advisable to install this way, or I should switch back to a non-skirted toilet like Toto Ultramax II.

I haven't installed Swiss Madison floor mounted toilets, but I did install one of their wall mounted units that seemed just fine. The thing I see that I don't like is having to tighten bolts through that tiny hole with a wrench.. The proximity to the water supply doesnt really concern me, but for ease of use a 1/4 turn style shut off could be much easier to use in that space.

I could see this Tite-Reach Extension Wrench tool coming in really handy in that situation.

I got the toilet installed. The water line valve was short enough there was a 1 inch gap to the edge of the toilet's side wall so it worked out ok. I used a long socket to reach down to tighten the bolts on the bowl.


I noticed something when flushing the toilet - right after water was replenished in the bowl. I heard some water dripping noise inside somewhere - water level in the bowl starting dropping again for about 15 seconds - and then stopped dropping. The water level drop was at least 1/4".

I would say normal because the water goes over the weir in the toilet. You can cut that down by adjusting the refill. If you don't have an adjustable refill, you may be able to get a refill tube with a pinch clamp to adjust the refill. I don't know if your refill tube diameter is the same as we have.

The refill is adjustable I'll adjust it down a bit then. I was wanting to up the water level in the bowl but I guess it went over.

Please let us know here and a write up on the products page somewhere after you've used it for a while how you like it.

Please report back on how that beast flushes. I will be amazed if it flushes well with a big load, since 2" flappers are pretty much from yesteryear now that 1.28 GPF is the required maximum.
Almost all modern toilets use a 3" or larger flapper/or tower for good reason.

I finally got the toilet installed and have been using it for a bit over a month.

The Vortex flush advertised on this toilet is surprising lacking the strength I expected.

1. Even with medium load, I see a piece or two toilet papers 'left behind' occasionally.

Occasionally I also noticed cloudy water left after a flush.

This is quite surprising as I never saw this problem with the older 1.6gpf AS Cadet 2-piece toilet that had a 3" flapper (which I kept for so long as it nicely flushed everything down nice and strong 99% of the times).


2. There seems to be a particular weak spot - the front-center area near the top of the bowl. That's the weakest spot.
(see photo)

Even one piece of toilet paper placed there won't ever get flushed down the bowl.

I tried 2 more flushes and the toilet paper was still left untouched. 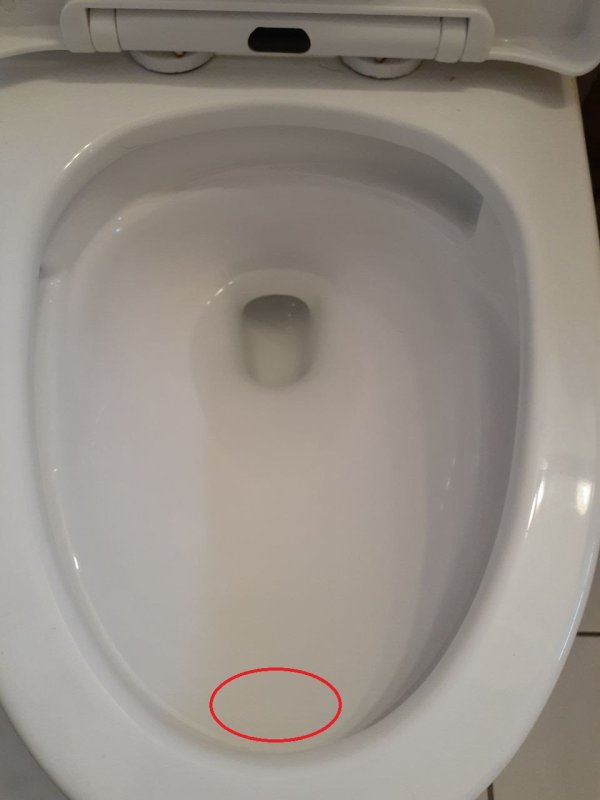 Eventually after 5 flushes or more the toilet paper was wet and heavy enough it dropped further and finally got flushed down. But this pretty much cancelled the benefit of low gpf.


I'm not sure if this weakness is related to the Vortex flush technology design. Basically the jet in the bowl pushes water out somewhat horizontally initially. It's possible the jet stream from this toilet is fairly weak, so any toilet paper located near the top front center area there (which is just below the jet rim) is left untouched by the jet stream.

I tried a colored dye test on the bowl. Colored dye at top front center area stayed around after a flush, so this confirmed the weak spot.

Obviously if the jet strength itself is fairly weak then it'd show up further with the tornado design.

Someone can perhaps let me know if this happens also with other 'tornado' designed flush jets in the bowl (e.g. Toto/AS).


This weak spot is the most irritating spot as toilet papers are left after a flush there almost daily. It is a very obvious and visible spot and it's just unsightly seeing this almost every day.


I'm keeping the packaging box if I can find a similar skirted design toilet I'll return the Tropez.

I haven't switched to other skirted toilets (e.g. Toto/AS) as they require drilling additional holes to the tile floor which I want to avoid.

I really love the sleek skirted design of the toilet but to me this weak spot really kills the toilet.


Anyone feel free to pitch in for any thoughts on this.
Last edited: Jun 7, 2022

Swiss Madison Vortex flush technology.
Why refer to this flush by a different brands technology?
The flushing technology by TOTO is totally different. And way better.

Update:
I see that Toto's Tornado flush has 3 jets. Swiss Madison's is same as Double-Cyclone which only has 2 jets facing sideways.

Perhaps that's the advantage of Toto's 'Tornado' 3-jet flush vs the Swiss Madison's Vortex flush which only has 2 jets.

I wonder if AS Vortex or Toto's Double-Cyclone flush has similar problem or not. I'm seeing Swiss Madison's Vortex flush as weaker flush than I expected.
Last edited: Jun 7, 2022

The only one that has ever said that VORTEX and TORNADO were the same was you.

I've only installed the one Swiss Madison toilet. And that was only because it was Furnished By Owner who happened to be an Inlaw.. and that house has since been sold so I will never know how well it performs. I doubt I'll ever install another one. None of the designers/builders I work with are very inclined to attempt to save money at the risk of performance.

The only one that has ever said that VORTEX and TORNADO were the same was you.
Click to expand... 
Naturally, I interpreted 'Dual Vortex' as synonymous to 'dual Tornado'.


Thx for highlighting the other elements such as bowl shape/trapway/flush valve size.

I was a bit hesitant when I read the 2" flush valve size. I took a chance hoping the Vortex design, the 2.75" trapway size, and the advertised 1000 MaP score would be good enough for me to click the buy button.

Made by different manufactures, different engineer designed them, different way they mold the clay, different branding, different performance.
Does a Chevrolet use the same parts as Ford. They use very similar names for the components. They tend to have four tires with at least two connected to a drive train. Pushing the gas pedal down will encourage them to go forward, some faster than others depending on engine size and weight.
You must log in or register to reply here.