I've got one of the HRVs that has a safety warning where the blower motor bearings fail and the unit catches on fire. The following explains it.

The manufacturer's band-aid fix was to provide the following inline fuse so that it will blow when the motor fails rather than come good for a terrible motor design. 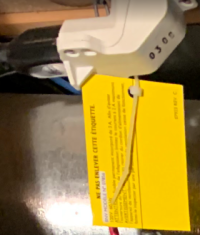 What was offered has some ports on opposite sides.

I also was hoping to be able to reuse the control wiring in the walls but have my doubts that will be possible. I have a four conductor cable going from the HRV to the nearest bathroom where I use two of the conductors connected to a mechanical crank timer. The four conductors then go to the next three rooms where there are also crank timers. The timers are all wired in parallel to the same two conductors.

Have u contacted venmar? Sleeve bearings are in most cases not designed to carry axial thrust loads.

fitter30 said:
Have u contacted venmar?
Click to expand...

To what end? They contacted me and supplied me with that inline fuse. They have not remedied that motor and would happily sell me an identical crappy one every few years.

Maybe in the USA, you have better consumer protection than we have in Canada.

LLigetfa said:
To what end? They contacted me and supplied me with that inline fuse.
Click to expand...

I contacted Venmar on March 15th and they confirmed that they sent me the inline fuse and considered the case closed. I requested the case be escalated and they reluctantly took my phone number and said level 2 support would call me back. I am still waiting for the call. I decided on a VanEE AI Series Model V160H75RS

I could not get a local dealer to sell me one so I ordered it online. It arrived yesterday and I will start the installation tomorrow. The unit does not have the ports on the same side as my old HRV so I will need to route an insulated flex duct 180 degrees. I will probably tape the inside bend with aluminum foil tape to keep the pleats from restricting airflow.

Insulated flex duct without the liner will slide over sheet metal duct pipe. Put liner over pipe and pull insulation over pipe throw liner away.

fitter30 said:
Insulated flex duct without the liner will slide over sheet metal duct pipe. Put liner over pipe and pull insulation over pipe throw liner away.
Click to expand...

The building air exhausted to outside could be at or near the dew point and so galvanized metal ducting is not something I really want to use. I realize you only mention sheet metal which could also be aluminum but finding 6 inch aluminum elbows is not easy. Getting a 100% seal on the elbows and joints is also a challenge and if there is any condensation formed, it could soak the insulation. Ideally, I would want the inner liner to fit over the elbows to maintain the moisture barrier but don't think I can do that.

I finished the install of the new HRV but have yet to install the Advanced Touchscreen Control. For now I have the existing crank timers wired in.

I am curious if there is anyone here that is familiar with this VIRTUO AI Series? Purportedly, it senses the pressure on the four duct ports and adjusts the balance automatically to compensate for changing conditions. Below is an excerpt from their brochure.

Thanks to Virtuo Air TechnologyTM, no need to balance the unit manually. Both PMSM motors are controlled by an artificial intelligence
performing 120 readings per minute then processing this information to maintain the requested airflow.
For typical installation, Virtuo will ensure a balanced ventilation at every selected speed regardless of the weather conditions, the type of
connection, the variable speed furnace/AHU, the stack effect, the filter clogging and so on. This results in peace of mind for installers and
users knowing that the unit will always remain balanced and that it will maintain its maximum heat/energy recovery efficiency.
Click to expand...

With that in mind, when I first powered up the unit prior to connecting the ductwork, I fully expected the initial test result to show the top rated 160 CFM but it was topping out at 140 CFM. After connecting all four ducts, it topped out at 120 CFM.

LLigetfa said:
I finished the install of the new HRV but have yet to install the Advanced Touchscreen Control.
Click to expand...

It turned into a much bigger job than I had anticipated. I decided to mount the control next to the thermostat for the furnace which is in a central hallway. The kitchen, breakfast, dining, and living room are all open concept except for a short partition wall so that upper cabinets would have a place to hang. I had forgotten that since the wall is load bearing, it had blocking installed. I had to take down a kitchen cabinet (upper) so that I could cut a large enough access in the drywall from where I could drill through the blocking. I then dropped a small chain down through the hole in the blocking and shoved a magnet up through the hole in the base plate and subfloor from the crawlspace since fish-tape was not going to hit the hole.

I had been meaning to take down the upper cabinet anyway to repair it since it was pulling apart from the weight of the china in it.

LLigetfa said:
With that in mind, when I first powered up the unit prior to connecting the ductwork, I fully expected the initial test result to show the top rated 160 CFM but it was topping out at 140 CFM. After connecting all four ducts, it topped out at 120 CFM.
Click to expand...

The explanation that Venmar support gave me was that the unit senses barometric pressure which may have been affected due to "stack effect". My home is fairly well sealed but at the time of installation, the wife likely had an upstairs window open as I felt a strong inrush on the fresh air supply duct, so that lends credence to Venmar's claim. I was going on the assumption that the unit would only sense differential pressure across the four ports.

I have had two instances where the touchscreen control lost communication with the HRV. Fortunately, I have a conveniently located wall switch that controls the outlet the HRV is plugged into so I can power-cycle it to recover from the communication error without having to go down into the crawlspace. I suspect that short intermittent power bumps are the root cause for the communication error.

The crank timers still work when the touchscreen loses communication and they are the only control the wife uses so I don't need to educate her on how to recover from the communication error. When rebooting the HRV, it goes through a POST (power on self test) during which time, the touchscreen is inoperative.
You must log in or register to reply here.

How do I insert an irrigation inline valve below the valve that is controlling the hose ?

Fix Drain in Garage Stemwall and Stacked Back to Back sinks