First and foremost, I'd like to thank all the men and women who post here for their insights, trade secrets, suggestions etc. I am a first time poster, long time lurker and I feel like I've learned a lot but wanted to consult the experts before I get myself divorced over a partially clogged drain.

Here is the situation, I am a first time homeowner since essentially the beginning of the pandemic. The house was partially flipped 5 years ago and built in the 50s so I have a mixture of PVC and I believe cast iron. The laundry sink and the kitchen sink are in the back of the house and connect in the basement in the back and run under the slab to the main sewer line. All of the bathrooms in the house are in the front so they all connect to the sewer stack and then the sewer line in the front.

This sink had issues overflowing a few months after we moved in and it has never been fully resolved. Before I found this place, I tried lye based chemicals as I didnt know any better and they actually worked enough where I did not need to worry about overflowing even if the washer was pretty full of water. I also added a test line on my sink so I could monitor and check if the sink could drain that amount of water in 30-40 seconds then the washer could empty without overflowing.

I tried snaking with a 50 foot handheld and have made enough progress in the past that I was able to push some kind of obstruction all the way to the sewer line and then keep working on it from the main cleanout located on the other side of the basement near the front of the house.

However, this time, every time I snake I just hit something and there is no give. It doesn't push, no matter how much I crank the cable it just spins basically backwards and I get absolutely no where. Nothing really comes back on the end either. I think the culprit is grease and/or pancake batter but there's lots of history in that pipe so I don't know for sure. Before I bought the house I had the sewer line scoped with a camera and that was all clear so it just seems to be a matter of clearing the line under the slab. I have no other backup issues with any other drain and the kitchen water will back up into the laundry sink but that is to be expected based on the configuration. The clog is probably 3-6' from where the vertical goes horizontal based on the amount of snake I need and my guess that it doesn't go too deep once the pipe disappears into the floor.

I even tried Bio-Clean per the suggestions here. I did I think 5 days at night at first (with some days mixed in after wife/kids gone) and then went away for a few nights. Then upon return for over a week I did every night and even did a few days mixed in and sometimes used 3-5 scoops instead of the standard 1. It's actually gotten worse and is draining slower now, as bad as it's ever been. I know the product doesnt clear the acute clog and removes the stuff that sticks things to the pipe so I'm wondering if I inadvertently caused more gunk to drop into the passageway.

I was also trying to avoid using a drain bladder as I saw some mention the possibility of it breaking and causing a worse problem. However, I grew more desperate and picked one up (Drain King if anyone is familiar) from a nearby plumbing supply store. Well, turns out I learned the hard way why people ask if you've got a horizontal cleanout on a vertical or a Y shaped. Clearly I have the horizontal and the darn thing won't even fit into the pipe in the first place.

And my best guess is that even with a real snake with a spade bit or chain knocker, I wouldnt be able to get it into the horizontal cleanout either, so that has prevented me from renting one from a Home Depot/Lowe's. So I figured if I called someone they would likely need to cut away some pipes and reconfigure things anyway?

As you can see, when they redid the kitchen they replaced the existing pipe with pvc and used no hub bands to secure. I think? My thinking was maybe I could try something similar. I've confirmed I can get my hands on a sawzall (or Dewalt equivalent) so I would just need to pick up a blade that is capable of cutting cast iron.

My understanding is the pipe is 2" as the cleanout cap measures approximately 2" (and the PVC pieces have 2s on them) so I would think I need a WYE cleanout that is 2" all around. I then add two small pvc pieces in the inside of both sides so they extend approximately 1.25" out and glue them with pvc cement. Once dry, I would measure the whole piece, add 1/4" and mark that distance on the pipe. I would then cut the pipe. Does it really need to be filed after? Once exposed try to use the Drain King to clear the blockage. Assuming all goes well, I would remove the steel bands, put the black gaskets onto the small glued pieces on the Y, fold them over on themselves, slide the whole thing into the space in the pipe, unfold the gaskets, add back the steel bands and tighten with a flathead. The bands have 40 written on them in the below so I guess I would try and use those but my assumption is anything 2" should work and I'm not sure I have the specialty torque wrench for some so would look for the flathead.

This is by far the most advanced plumbing project I have considered undertaking despite it's simplicity to you guys. Until now, I have mostly done basic hardware swaps with basin wrenches. I think I can handle it though and will be calling a pro should anything go awry.

ANY suggestions are welcome. Is this a decent plan? Do I have all the steps correct thus far? Seriously, I would rather not cut my lines apart but I'm not sure what else to do. I think my main cleanout even curves towards the front of the house so I couldn't even try snaking "backwards" towards the clog if I wanted.

If you have made it this far, thank you very much for your time. It is truly appreciated. 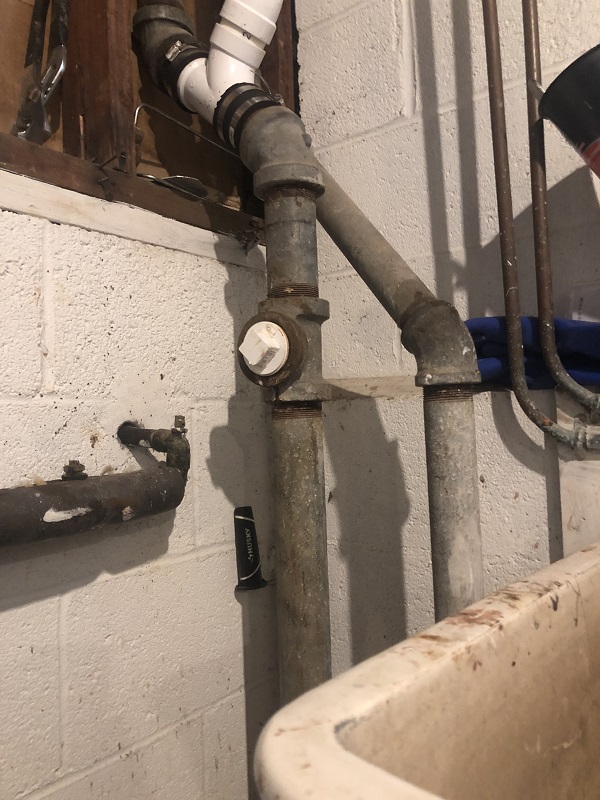 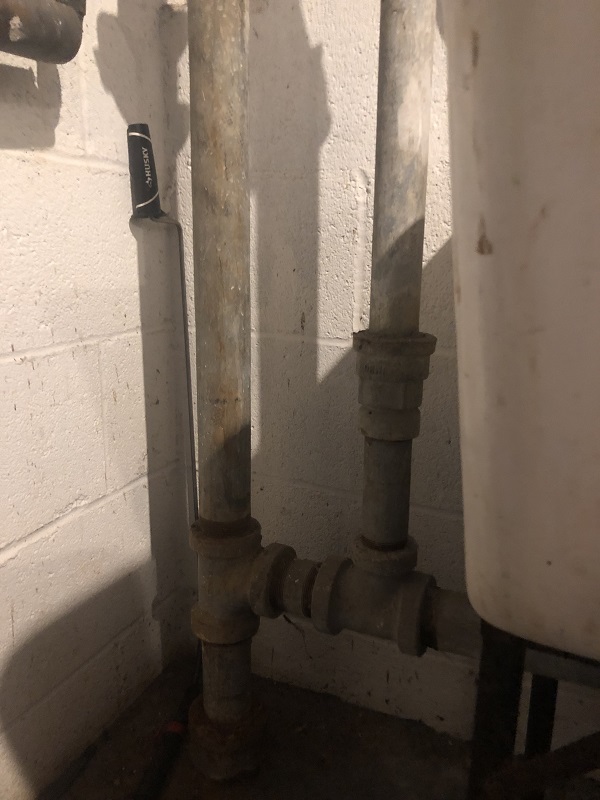 Was the snake you used was it a power auger? After 60 years with the sink used for the washing machine drain the galvanized pipe is full of soap crud, lint and grease. Internally galvanized pipe does rust and the inside diameter gets smaller. The problem using chemical cleaner is it softens the crud and as you snaked it, the crud breaks lose and further plugs up the blockage further down.

I'm not sure what you're trying to do by repiping. The pipe with the clean out is the drain and the pipe running under the sink is the sink drain? I would rent a power auger and give it a try before cutting pipe.

I think that only cast iron you have is at the floor. The other metal drain/vent stuff would be galvanized steel. The exception could be the fitting in the vent line a few inches above the sanitary tee on its back.

So what I would consider is to saw the vertical vent pipe in two places, and remove a section. The lower open end would allow you to a push a medium drain bladder. Now where do I cut, and what do I put back into the gap with shielded couplers?

I am thinking of two ways. One would be to saw a couple inches below the cleanout, and to replace the gap with a piece of PVC pipe. The other would be to saw just above the existing cleanout, and to replace the missing section with a PVC assembly that included a wye as a new cleanout. I am not a pro. I did once saw a drain pipe twice and successfully used a drain bladder, but that was copper pipe... much easier to saw. I used the cut-out section to fill the gap when done.

A big-enough cutoff wheel in a big-enough angle grinder could make for easier cutting. A hacksaw would be cheaper and less dangerous.

Cut out a section of pipe in the most convenient location to have it cleaned and call a professional drain cleaner. Let them clean your drain, say thank you and then repipe it. Generally closest to the clog with the least amount of bends and in the largest pipe available will be where you want to cut.

I agree. Cut it, Clean it and repipe.
I flipped an old house a few years ago and when I cut the 2" main sink line near the floor penetration, it had a drainage path no wider than my pinky finger through it. Just stuffed with a red clay style grease. I did the same thing. Called roto rooter to clean from the cut to the street, then repiped the rest.
You must log in or register to reply here.