I am new to wet vents. Would this pass inspection? California UPC

The only vent I would install is on the 3" vertical stack.

For external reasons, it would be quite a bit of work to install additional vents (toilet, shower, sink): there's a decent amount of structural beams around that can't be drilled into (beams are located in the 2nd picture, cyan color)

California uses the IRC and the UPC, and it has not adopted the plumbing sections of the IRC, so single family residential is also subject to the UPC.

Is the green circle the 3" stack? A vent through the roof with nothing draining down from above?

Then your orange sink trap arm could work at 4' if you really use a 2" trap under the lav, but that would be pretty unusual. A 42" maximum trap arm and a 1-1/2" lav trap is far more typical. Assuming no beam/headers in the wall the orange trap runs along, you could pull off a vent earlier and revent it to the stack higher up. Also, the trap arm would have to connect to the stack itself with at most one pipe diameter of fall from the trap outlet elevation; you seem to show it hitting the 3" green drain, which would be below the floor.

However, your WC and shower are not properly vented. With the routing show, each would need a dry vent take off, for the shower with 5' of the trap and before it falls 2", and for the WC within 6' of the closet flange, measured along the pipe.

Is the floor shown on a slab or wood framing, and what's underneath? You could definitely reroute the sink drain to use it to wet vent the WC; getting it to wet vent both the shower and the WC would be more challenging.

wwhitney said:
Is the green circle the 3" stack? A vent through the roof with nothing draining down from above?
Click to expand...

wwhitney said:
Also, the trap arm would have to connect to the stack itself with at most one pipe diameter of fall from the trap outlet elevation; you seem to show it hitting the 3" green drain, which would be below the floor.
Click to expand...

Thanks, will make sure of this.

wwhitney said:
However, your WC and shower are not properly vented. With the routing show, each would need a dry vent take off, for the shower with 5' of the trap and before it falls 2", and for the WC within 6' of the closet flange, measured along the pipe.
Click to expand...

The 5' for the shower vent is going to be tricky. Attached is a photo of the beam locations, forcing the vent to be in the closet, 6' away at the minimum.

I'm going to assume the beams shown are all above the floor, so they are obstacles for a dry vent, but not for the drains. Can you do something like the drawing below? That would be a standard wet vent order of connections.

The orange line is all above the floor, with the new orange circle a dry vent takeoff for the lav (details on that momentarily deferred). Then once the lav drain crosses over the WC drain below, it turns down into the floor system to wet vent the shower (blue line) and then the WC (original purple line). The shower trap arm is limited to 5' from the p-trap to where the lav drain joins it, and the WC fixture drain is limited to 6'. Not sure if those distances fit the limits, but it could be a reason to rearrange a partition wall if they are close but over the limit.

The lav trap arm (up to the vent takeoff) can be 1-1/2", but the dry vent and the lav drain after the vent (the wet vent) need to be 2". And I imagine you can't run either of those through the beam or the posts supporting the beam. So either you'd need to figure out how to keep the lav trap arm out of the wall until past the post, and run the vent up and over the beam (e.g. if there's a wall stacked above), or you'd need to fur out the wall another 2" to 3" so that all the DWV can be in front of the beam and posts. 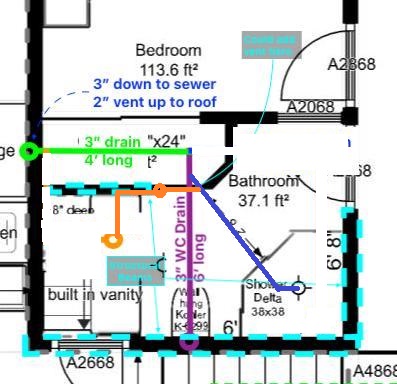 The beams are in the floor (not above), though the constraints are similar.
Thank you Wayne. I think I'm very close now.
You have the lav (orange) draining into the shower (blue), then connected to a wye to the WC (purple), right?

The shower (blue line) is 6' from the shower drain to the wye connecting to the 3".
I am thinking offsetting the P-trap to make it a 5' run with a 1' drain-Ptrap offset.
At least to pass inspection, then I could always move it under the shower before closing the subfloor.

I don't see how beams in the floor restrict vent takeoffs, just drain routing, but maybe I'm missing some info.

Yes, to wet vent under the UPC, the lav fixture drain joins the shower fixture drain, and that branch joins the WC. It needs to be that order, i.e. WC last.

You should be able to find a layout that complies with all of the above; don't make changes after inspection.

The beams are snug with the subfloor, with joist hangers for the joists. I can't notch a beam without engineer approval

CaliforniaPlumber said:
The beams are snug with the subfloor, with joist hangers for the joists. I can't notch a beam without engineer approval
Click to expand...

Ah, that would restrict vent takeoffs below the floor, but has no bearing on the lav vent takeoff. And with wet venting, that's the only dry vent takeoff.

If you did have to do a vent takeoff below the floor, you could have your vent kiss the beam corner, and pad out the wall framing as required. Which would not be too much if it is a location with a baseboard.

Cheers, Wayne
You must log in or register to reply here.

Is this ready to pass inspection? California UPC