Hello, I am new to the forum and was hoping for some advice with drains for a bathroom addition in a half story of a cape. I am located in MA which has its own plumbing code (but is similar to UPC).

Some of the challenging conditions are:
1. the ceiling is sloped (with a clipped gable) which add some challenge to the venting.
2. left and right walls are 4 ft knee walls
3. the vertical branch drain for this bathroom comes up under the floor in front of the window.
4. there is an existing 6" range hood vent that makes a 90 and obstructs the sink side of the joist bay where the stack is.
5. joists are 2x8
6. Cannot bulkhead due to kitchen / cabinetry below

The 3" drain goes to the basement and the only other fixtures on it are a future basement 1/2 bath that will be vented separately. The biggest head scratcher for me is the best way to tie in the sink? I am proposing to tie it into the 2" shower drain making a 90 to come back around the other side of the range vent and up to the si

All feedback is welcome! 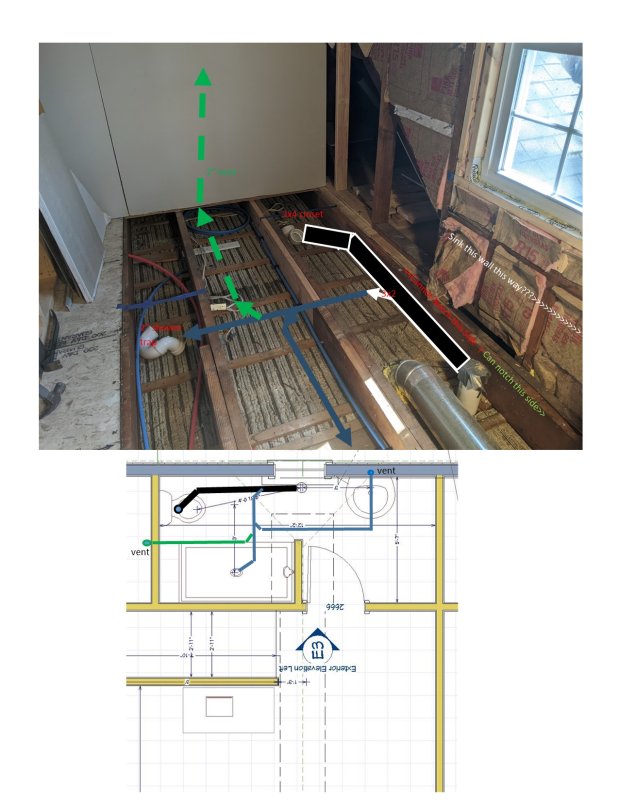 The shower isn't vented right in your drawing. Can you get into that dividing wall between the shower and lav room?

If you can get into the stack at two different elevations you should be able to get this to work. The problem is for a wet vent the toilet needs to drain first and for a dry vent the vent must be vertical

John, I would have to see if there's enough space . are you suggesting something like this with a vertical vent where the green dot is 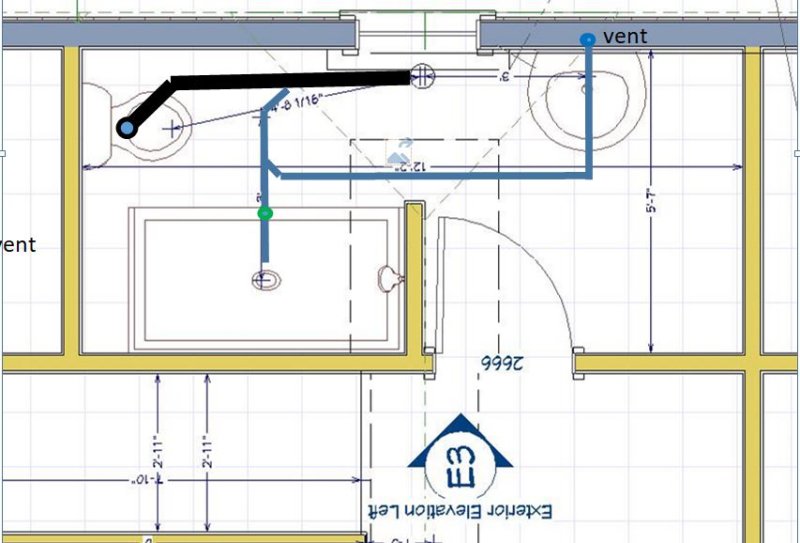 Seems like the green vents in either drawing can just be eliminated. The lav wet vents the shower and then the WC. For UPC that would require a 2" lav vent and drain, not sure if MA is the same.

The room layout is definitely a bit weird. How about a picture showing the other end of the room? Can the door entering the room be adjusted?

That could work if you keep the lav drain in the exterior most joist bay. Can you adjust the duct run at all? Or you could look at ways to reinforce the 2x8s to allow holes in other locations.

WW - the door and duct cannot be moved.
the joists are 7.5" deep and the first 2 joist bays are roughly 22" wide with sistered joists.

The toilet and 3" will be in the first joist bay where the drain turns down. Being limited to a 4' horizontal run on the 2" section, if i can eliminate the vent by the shower, i can change the pan to a RH drain pan which would allow me to run perpendicular to the joists within the cantilevered portion(the wall beneath is load bearing). It would also reduce length of the run to the sink.

The joist that the exhaust goes through is nailed to the exterior wall and can be notched or cut in any way.

Thoughts on this revision? 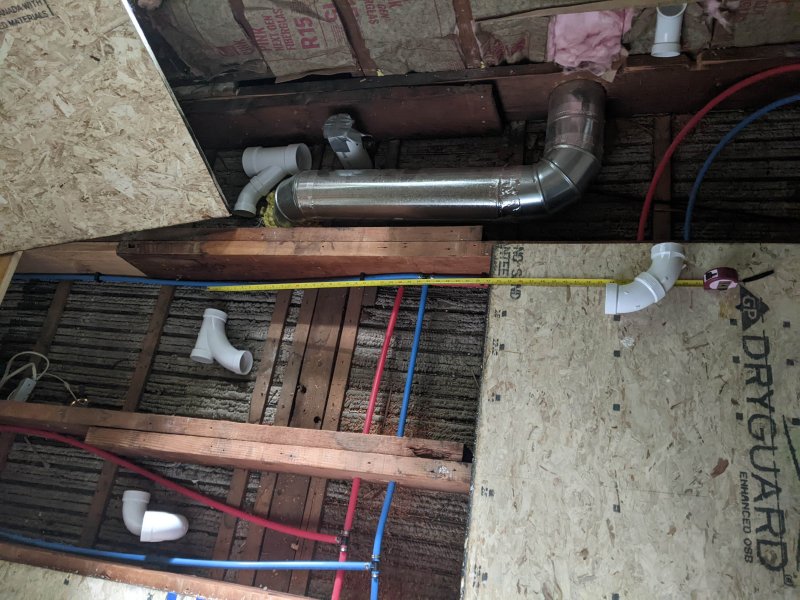 That 4' maximum run perpendicular to the joists accounts for the total run between any two joist penetrations. So in the photo above, if the combo where the lav joins the shower goes through the double joist as low as possible (bottom of hole 2" up from the bottom of the joist), then you should be fine on the segment to the shower trap. But the lav drain on the right of the picture goes through the joist again, and the highest it can be is 1" higher (top of hole 2" down from top of joist). So you need to check where that run between the two penetrations of the same joist will be 4' or less.

The above assumes the joist tops are actually level. If they are out of level, that might hurt or hinder you, so it needs checking.

Can you fit the 2" lav drain between the duct and the joist at left? The rest of the duct could be reworked a little to provide more clearance from the joist, but moving the place the duct enters the joist bay can't be done from above. If you can fit it, and if the fittings would fit, you could keep the lav in the exterior bay.

Also worth checking MA code to see if it would allow a 1-1/2" lav drain/wet vent like the IPC does, vs. the 2" the UPC requires.

Lastly, while it would be an intrusion, if the kitchen cabinets below go all the way to the ceiling, you could lose some cabinet space and box out DWV from inside the cabinet. Just a last resort option.

Is that duct an exhaust for an oven? It's really making your plumbing less than ideal.

I think a slight rework of the duct is do-able and I would be able to squeeze it by.

Due to the width, it misaligns the 3" drop but perhaps I can put a 1/16th bend in between tit. Alternatively, if I can find a 2" 1/8th no hub, it might reduce the width of the assembly. 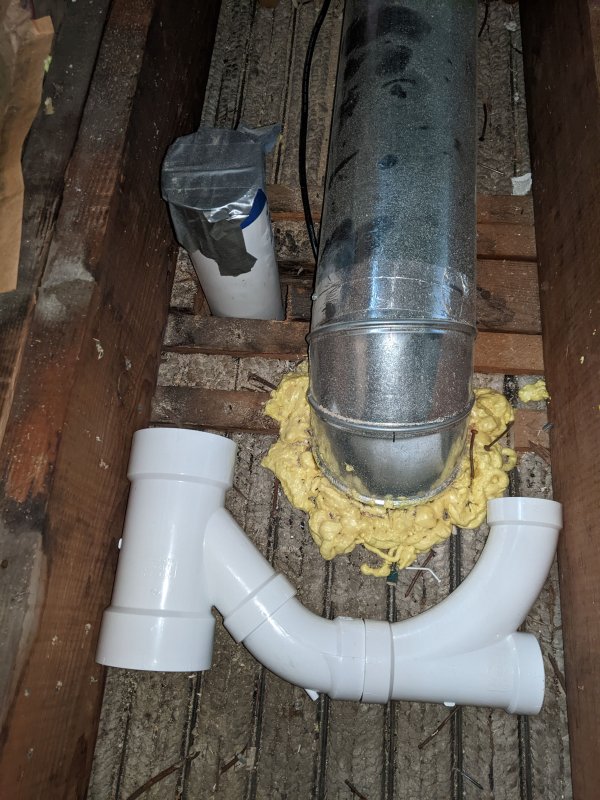 the duct is for a range hood... there nowhere else to terminate it without interfering in some way. the wife did not want it in a kitchen bulkhead when we had our kitchen done.

A 2" combo would help you on the alignment on the left, but they don't make those. But you could try a 2" street wye plus a 2" street 45, in place of the combo. Or no hub cast iron.

You could also transition the duct from 6" round to 3.5" x 10" rectangular, that would give you 4" of clearance in the joist bay, although I think that wouldn't be enough for your DWV.

I really ony need like an inch, if that. I'll have to find a 2" street wye to see what that gets me in the way of extra space. Assuming it works, I think I found a solution.

Thank you for all of the input!

I have done very little horizontal wet venting. if not for this site I'd see far less.
It looks like the dry vent isn't needed. and just rely on the lav for venting?
You must log in or register to reply here.